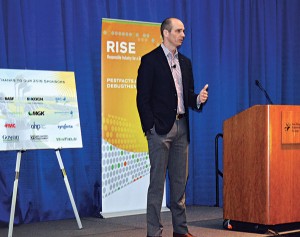 Aaron Hobbs, president of RISE (Responsible Industry for a Sound Environment), outlined recent legislative and regulatory threats and wins, as well as long-standing and emerging obstacles and opportunities, while speaking to pesticide manufacturers and professional end users at the recent Golf Industry Show in San Diego.
Photo: Marty Whitford

“Industry unity is key — especially with our diverse membership and ever-escalating local, regional and national battles,” said Aaron Hobbs, president of RISE (Responsible Industry for a Sound Environment), while speaking to pesticide manufacturers and professional end users at the Golf Industry Show in San Diego in late February. “Our job is not done at RISE until every single member and customer is protected.”

Hobbs discussed how the Pesticide Education and Control Amendment of 2012 — proposed by Washington, D.C., City Council Ward 3 Member Mary Cheh — was defeated two times, but eventually passed after its third introduction. Then, the negative ballooning effect took hold, and what was a two-time local win for RISE became losses in several localities, eventually creating a national issue.

“Any issue at a local level has the potential to really balloon,” Hobbs warned.

Hobbs said the top advocacy priorities for RISE in 2016 are: 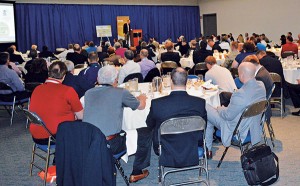 Hobbs told the packed room of RISE members and end users, “Our job is not done at RISE until every single member and customer is protected.” Photo: Marty Whitford

“Numbers one and six are especially tough sometimes, but they’re critical,” Hobbs said. “As an industry, we need to accept that a minuscule minority may never see the value in our professional people and proven, tested products. But no matter what they say or do, we must always be professional, and say and do the right thing.”