Odorous house ants are easy to encounter and hard to pin down. Getting to the source(s) takes patience and an integrated approach. 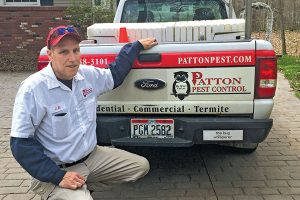 In early May, I seized upon the opportunity to follow J.R. Walsh around at an odorous house ant (OHA) account. Walsh, 45, is a service manager for Patton Pest Control in Novelty, Ohio, an eastern Cleveland suburb. His “no uncles” line, although up there with the best of the worst “dad jokes,” is a good temperature-taker when meeting a client for the first time.

He says having a silly joke or two on hand can help break the ice.

Walsh has been with Patton Pest Control for 25 years. The former volunteer firefighter says the job came at a time when he was working as a car detailer at a dealership. He had come to the realization that he needed a career that let him work outdoors. 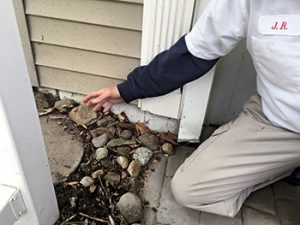 Walsh is glad to see rocks rather than pest-inviting mulch next to the foundation at the home. Gravel would be better, though.
Photo: Heather Gooch

We head to a brick-and-siding split-level home in a quiet neighborhood, surrounded by mature trees. A dog barks from behind the basement door as we enter the house to talk with the homeowner.

Before we go in, Walsh explains, when he trains techs, he tells them to put down the sprayer.

“The flashlight is the No. 1 tool when you come in,” he says. “Your hour-long visit should consist of 45 minutes investigating and 15 minutes spraying — not the other way around.”

Walsh knocks on the door, introduces us to the homeowner and makes his infamous uncle joke, which is met with a polite chuckle. It swiftly indicates that the man, who seems to be in his early 30s and looks like he took the day off from work to wait for the appointment, would prefer that we do what we came to do and move on. Walsh gets down to business.

Right away, Walsh notices the store-bought ant bait stations in strategic spots around the intersection of the entry hall, living room and kitchen. He later tells me that if a client does resort to do-it-yourself tactics, he’d rather it be bait traps than spraying aerosols, because the latter simply breaks the ants’ pheromone trails and causes them to scatter.

The homeowner explains how he and his wife purchased this, their first house, in January. They had been dealing with the ants for a couple weeks. While most ants were initially found in the kitchen, his wife had reached her breaking point when they were marching up her leg on the living room couch. That’s when she called Patton
Pest Control.

“Happy wife, happy life,” Walsh sympathizes. He gets his flashlight out and shines it on a couple of ants hurriedly walking to and from the entry hall’s coat closet. They’re definitely OHA (Tapinoma sessile), a species Walsh says he has seen more of in recent years.

He opens the closet’s double doors and finds a large plastic container of dog food.

“There’s their protein,” he says. Although the container is obviously a step up from simply storing bagged food on the floor, he notes that even crumbs that fall into the tile cracks can be enough to be a food source for the ants.

After further inspection, Walsh realizes there are two trails: one back and forth from the dog food storage container in the closet, and one about 12 ft. away, following the horizontal line of the heat register against the outside kitchen wall. OHA are known for having multiple nests, with friendly colonies. But they’re also known for traveling great lengths — as far as 100 yds. — to gather food. In other words, there could be one nest or several. It’s difficult to gauge the scope.

“You can find trailing odorous house ants three fingers wide,” Walsh says. That’s not the case here, though. We only see about a dozen ants busily going about their Wednesday morning.

Getting the lay of the land

We make our way around the perimeter of the house. “Myrtle and ivy, ugh,” Walsh mutters.

He explains how he hates seeing either one at an account, because of ivy’s penchant for climbing walls and spreading far and wide — serving as an ant highway. Myrtle is slightly better, he says, but ants and other pests, like mice, can go undetected under its thick ground cover as they seek ways into the structure.

Although the yard itself is mowed, the vegetation around the house is on the verge of going wild.

“I recommend about 12 to 18 in. of gravel from the foundation, and then mulch from that barrier,” Walsh says. “That does two things: It lets the moisture penetrate, and it serves as an automatic measuring stick for cutting tree limbs. If the limb is over the gravel, it’s too close to the house.”

Walsh says that ideally, a house should be able to receive a couple hours of sunlight everywhere.

“It can be done just by thinning out a couple of the tree canopies,” he says. “The only two things that are going to dry out moisture are air flow and sunlight. You need to do everything you can to contain moisture.”

We encounter a skittish toad and several spider webs of varying sizes (“nature’s glueboards,” Walsh calls them), but little else. He crawls underneath the deck and darn near disappears.

“He has a hole in his foundation, which I’ll take a picture of,” says Walsh’s disembodied voice. (I can only see his feet.) “He should seal this up so mice don’t get into the house. Also, his dryer vent is clogged up.”

I try to sound like I know what he’s insinuating: “Is that also a rodent issue, would you say?”

There’s a bit of a chuckle from under the deck. 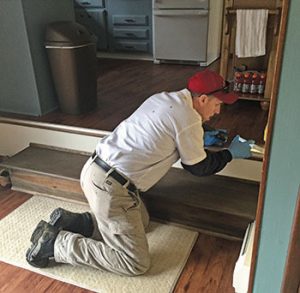 Walsh injects bait into cracks and crevices where he has observed ant activity.
Photo: Heather Gooch

“No, it’s more of a fire hazard. His dryer is not going to work very well.”

After Walsh re-emerges, we continue winding our way around the perimeter. He says the house has an addition built on the back. It was built some time ago, though, and has settled, causing a crevice to open.

“It should be sealed with concrete, to prevent moisture problems and pests from getting in,” Walsh says.

Over a brick pathway on the side of the house, I see ants going to and from underneath a brick. To me, they look like the tiny OHA we saw inside, but Walsh knows better.

“They’re pavement ants,” he says. “They’re smaller, slower and don’t have that distinct odor when crushed.”
About eight years ago, pavement ants used to be more prevalent than OHA at accounts, Walsh says: “Ant species influx tends to run in cycles.”

We have circled the perimeter, and encounter no OHA outside. “I could spend a couple days out here. With all this vegetation, they could be anywhere,” Walsh laments after circling the perimeter without encountering any outside OHA.

He then tells me of a carpenter ant job from years ago, where he spent about 45 minutes following the trail of one lowly ant. The lady of the house entered the room, saw the ant, exclaimed, “There’s one!” and stomped on it before he could protest. 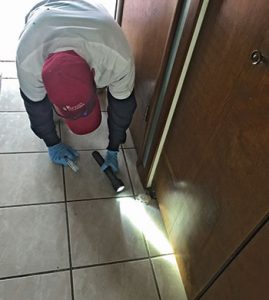 Walsh is careful to observe the ant trails before treatment.
Photo: Heather Gooch

We go inside, where Walsh informs the homeowner of the game plan: Gel bait in the cracks and crevices where the trails were observed, and then a perimeter spray outdoors. The gel bait will provide a knockdown so the homeowners won’t see the ants day to day, and the spray will provide residual.

Walsh also advises the homeowner to put the store-bought traps away so the gel bait treatment he put in cracks and crevices has a better chance of knocking down the population. He recommends using a solution of water and vinegar to wipe down the side of the cabinet where the ants trail up to the counter.

“It will destroy their pheromone trail,” he says. “It would be like someone breaking up your driveway in the middle of the night, so in the morning you wouldn’t be able to back out of your garage.”

The homeowner seems pleased with the strategy, after being reassured his dog will not be at risk with any of the treatment. Walsh also goes over with him details of the large foundation hole and the dryer vent clog he found under the deck, and how to remedy both. He and I go out to the truck to get his materials, and then back inside to the entry hall/kitchen/living room intersection.

Wearing gloves, Walsh uses bait syringes with surgical precision in the areas he identified as having ant trails. The indoor treatment is over within minutes, and we’re back out to the truck to ready the sprayer.

“So many techs fill their sprayer in the driveway,” Walsh says as he opens a jug of insecticide over the back of his truck. “What happens if there’s a spill? We train our techs to always fill it inside the truck bed. If there’s a spill, it’s automatically contained — no pets, no children near the spill.”

Walsh has been gracious, humorous, practical and wise throughout our hour or so together. Here’s a helpful anecdote from Walsh:

Like many pest professionals, every Patton technician is outfitted with two sprayers. One is for indoor work, the other for outdoors. Several weeks ago at a complex bed bug cleanout, one of Walsh’s co-workers asked him to “get my sprayer off the back of the truck.”

“So I look and see both sprayers are full. This means I have a 50/50 chance of knowing which one he wanted,” Walsh explains. Although each sprayer has an inventory number written on top with marker, he plans to take things a step further so there’s never uncertainty: “This season, I’m going to tag every sprayer we have with laminated product name cards and carabiners, so if the worst case happens and there’s an accident, everyone — from the tech to the fire department — knows what’s in it.”

A pattern of Pattons 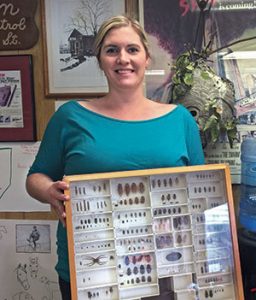 Molly Patton Marsh, who is due with her second child in November, shows one of several insect identification drawers on hand at Patton Pest Control’s headquarters.
Photo: Heather Gooch

John R. Patton founded Patton Pest Control in 1964. For many years, the entomologist was the supervisor of The Great Atlantic & Pacific Tea Co. (A&P) supermarket chain’s pest control service. When A&P decided to eliminate the service, he started his own business, with the supermarket giant itself as his first client.

Molly Patton Marsh joined Patton Pest Control after college and is currently CEO (her mom, Pattie Patton, and sister, Mary Patton, are CFO and COO, respectively). Following in the footsteps of her father, John S., she’s president of the GCPCA, is on the board of directors of the OPMA and is a member of Future Pest Managers of Ohio, a group that helps the next generation of OPMA Board members and executive board members network, etc. She also is active in the NPMA’s Leadership Development Group. But her priority is continuing the legacy of the company her grandfather started before she was born.

“Many of our customers are long-term; we’ve had them since the 1970s. We have lots of multi-generation clients, too,” Marsh says. “In fact, the biggest reason for cancellation is death or moving. When they retire to the Carolinas or Florida, they often ask why we don’t have a branch down there yet!”

An out-of-sight approach to ant baiting

An interview with an odorous house ant