Schopen and his wife are partners in work and life 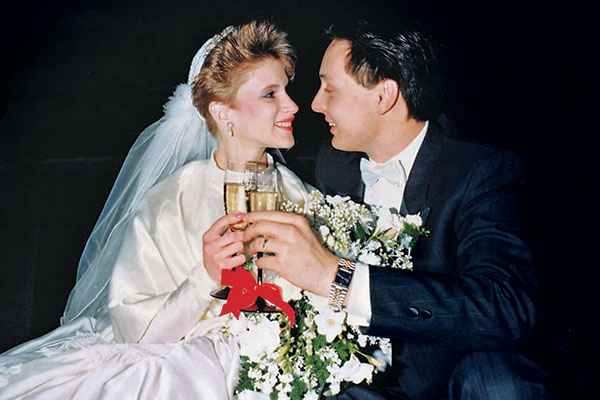 “To have and to hold, and perhaps to also do my company billing one day?”
Photo courtesy: Pete Schopen

I must admit I’m a sucker for a good love story. “Jerry Maguire” and “The Princess Bride” are both in the Pete Schopen Top 10 Movies category. I know that a rough-and-tough exterminator is supposed to be more into “Terminator” or “Mortal Kombat,” but I’ve always liked seeing people fall in love. My sappiness barometer does have its limits (e.g., “The Notebook”).

I actually have a real-life love story, and here it is:

When I was 18, I nearly flunked out of Kansas Wesleyan University. Too many parties and not enough studying — picture “Animal House” meets “Talladega Nights,” and you have an idea of how bad my freshman year was.

That summer, I regrouped for my sophomore year and transferred to Elmhurst College, a liberal arts school in Illinois. On the first day of orientation, I was hanging out with my tour guide when I glanced across the courtyard and saw this beautiful blonde (KAPOW!). She was laughing, and I fell in love with that smile instantly. I was too nervous to walk up and introduce myself, but I memorized her name tag. A few days later, I was waiting outside on a bench for my first class to start when she walked by. I said, “Hello, TJ!” and walked her to class. Tamara Jean (Grosch) Schopen and I have been with each other ever since.

While Tami and I have been married for more than 24 years, she has only been working with me for four years. In fact, this month marks her fourth anniversary with Schopen Pest Solutions.

For the first six years of my company, I did everything — billing, calling routes, running routes, setting up tech schedules, prepay letters, etc. At first, it was kind of cool to sit in my cozy basement office, drinking a glass of merlot and finishing up the billing. Over the years, the more my company grew, the more stressful it became to handle all of the paperwork. I had to switch from merlot to Jack Daniels.

A little over four years ago, I put an ad in the newspaper for a secretary. A few days later, a beautiful woman with an infectious smile walked into my office and said she was the perfect secretary for me: Tamara Schopen!

When she first floated the idea to me, I was incredulous. She was a college professor, and I didn’t want her giving up her career for my company. My wife loves teaching, and I knew it would be a sacrifice. She only wanted to join the company because she loves me (and, just as likely, didn’t want me to hire some voluptuous 20-year-old). The truth is, Tami has always sacrificed for my careers, and I didn’t want to drag her down that road again.

As a young sports broadcaster, I forced her to move up our wedding date from Feb. 14 to Dec. 28 because of a broadcasting commitment. She wanted a Valentine’s Day wedding, and that particular year it fell on a Saturday, which would have been perfect, but my brand-new job was handling the play-by-play for a college basketball team — and their conference championships were Valentine’s Day weekend. We lost our deposit on the banquet hall.

My second job was in Missouri, and she had to give up her teaching gig in Nebraska so we could move. She couldn’t use her Nebraska or Illinois teaching certificate in Missouri, so she got a short-lived secretarial job before we moved again.

This time it was to Cleveland, Miss., where I got a job with Delta State University. Tami actually was able to get classes for free because I worked for the school; she earned her master’s degree in English education. After that, it was on to Raleigh, N.C., where she found work at a private high school. She loved it, and we had a good three-year run there.

A move back to Illinois to be closer to family was a new start for us. We were 30 years old, and neither of us had a job. I ended up getting into pest control, while Tami found a job at a private school. After a few years, I started Schopen Pest Solutions and she started teaching at a college.

I originally didn’t want Tami to work for me because she would be giving up teaching again. Outside of that giant sacrifice, I also didn’t want Tami to work with me for fear of putting a strain on our marriage. You always hear horror stories about marriages suffering when a husband and wife work together and then have to spend time at home together. For us, though, it couldn’t be farther from the truth. My happiest time of every day is when my wife walks in at 7:30 a.m. to grab paperwork, tease me about something or annoy me on purpose because she knows I’m concentrating. I cherish that moment every morning. Having my wife at work also gives me someone I trust with thoughts and ideas.

To keep our marriage as stress-free as possible, though, we do have a couple of rules:

By practicing just those two rules, we’ve been able to separate work and personal life. We also try to go on two or three private dates per month, leaving the boys at home.

Last month, I celebrated Schopen Pest Solutions’ 10th year in business; this month I’m celebrating my wife’s fourth anniversary of handling our billing. I love, respect and admire her. This December will be our 25th wedding anniversary, and I’m so glad she’s such a big part of my life.

Thank God I nearly flunked out my freshman year.