“I usually don’t talk about my years at San Quentin State Prison, but not for the same reason most typically don’t discuss their time served there,” says Dr. Vernard Lewis.

As an entomologist and certified pest control operator, Dr. Lewis performed pest management at the legendary California correctional facility from 1984 to 1988.

Dr. Lewis did two years at San Quentin as an outside service provider, followed by two years as the facility’s on-staff pest control coordinator. Since then, Dr. Lewis has worked for a different type of institution: the University of California – Berkeley, from which he received his doctorate while working in the big house.

“I’ll never forget my time served at San Quentin,” says Dr. Lewis, a UC Berkeley cooperative extension specialist and renowned researcher. [Dr. Lewis will be inducted into the Pest Management Professional (PMP) Hall of Fame on Oct. 17, the night before PestWorld 2016 kicks off.]

“It’s an entirely different world inside those cold, cement walls,” Dr. Lewis says. “We were battling nasty bed bug infestations in the mid-1980s, two decades before the parasitic pests escaped and really began victimizing the outside world.”

Why were bed bugs Enemy No. 2 (behind cockroaches) at San Quentin? Home to more than 4,200 prisoners, the facility — established in 1852 — has more than a few cracks and crevices where the cryptic bloodsuckers can hide. 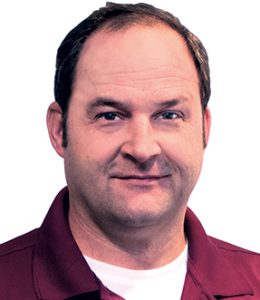 “Bed bug problems at correctional facilities have only intensified since I was at San Quentin,” Dr. Lewis says. “Why wouldn’t they? Bed bug infestations have spread everywhere else.”

The bed bug work is out there — or, in this case, “in there” — but pest management professionals (PMPs) need to understand the rules “on the inside.” What follow are tips shared by those on the firing line: How to nab bed bug and general pest control (GPC) contracts with correctional facilities, and how to work within the system to inspect and protect.

“Initially, we were fielding bed bug calls every week or two from each of the three correctional facilities,” says Randy Rupert, team leader for Batzner Bed Bug Services. “Now that we’re in there — regularly inspecting, treating, monitoring and educating — we can go several months without a bed bug call from any of the facilities.” 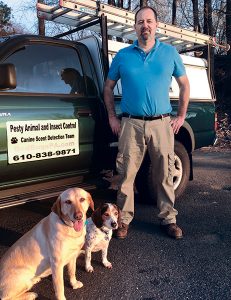 “Inevitably, we get ‘the bed bug call’ from correctional facility clients,” Meitler says. “It’s more than a call. It’s a calling … to protect public health on both sides of the wall. These bloodsuckers pay no mind to the big walls we build. To avoid a bed bug epidemic, we need to serve all.”

Glenn Holschwander answered the call. A county jail asked his Easton, Pa.-based company, Pesty Animal & Insect Control, to sniff out a suspected bed bug infestation. Holschwander spent four hours a day, for five days straight, inspecting the facility with his four-legged friends: Holly, a yellow lab, and Faith, a beagle. Fortunately for staff, detainees and visitors, the one bed bug found in the kitchen was crawling solo. 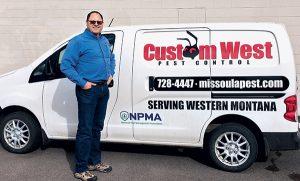 Holschwander and the other PMPs shared a few tips to locking up contracts with correctional facilities: 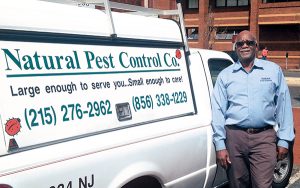 These are just a few of the many Trojan horses bed bugs freely ride, undetected, in and out of even the most “secure” correctional facilities.

“There are so many suspects — so many groups of people, types of products and sorts of spaces — it’s hard not to play ‘the blame game,’” admits Michael Sands, owner of Natural Pest Control Co.

Based in Camden, N.J., the firm serves five state-run correctional facilities. “While some corrections officers and staffers are quick to point their fingers at the inmates, we’ve found that bed bug infestations are just as likely to start in their homes, squad cars, offices and locker rooms.”

“Bed bugs are equal opportunity offenders,” Parke adds. “They don’t really care whether their next meal comes from an inmate or an officer.”

“Imagine a free, all-you-can-eat buffet open 20 hours a day right where you live,” says Jerry Schappert, owner of The Bug Doctor in Ocala, Fla. “That’s the lottery bed bugs win when they infest correctional facilities, where their victims are literally caged for most of the day.” 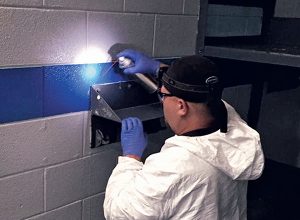 Termitech’s Steve Parke applies an aerosol in cracks and crevices in an
inmate cell.
Photo: Termitech

“The reemergence of bed bugs has forced PMPs to embrace integrated pest management (IPM),” Sands adds. “With bed bugs, there is no silver bullet. Even if we do eventually formulate a one-shot solution, history tells us these little bloodsuckers will adapt and overcome.”

“For each infested bedroom we find in the two-story pre-release center we service, we also inspect and treat the two adjacent rooms and the three rooms above or below them,” Nunnally reports.

World Pest’s Meitler points out that heat treatment often doesn’t work as well as it does in other structures due to jail cells’ thick concrete walls, floors and ceilings.
“We perform three chemical applications, each two weeks apart,” Meitler adds. “We rotate a few pesticides to combat any resistance issues the bed bug population may have built up.”

Parke suggests PMPs need to think both inside and outside the box. For instance, sometimes bed bugs grant themselves furlough, riding the prisoner parade into courtrooms. Parke’s Termitech, which services the Estill County Jail & Detention Center, recently treated bed bug-infested chairs at the neighboring courthouse.

Holschwander warns that not all corrections staffers are open and honest about potential problems PMPs may encounter while inspecting and treating cells. For instance, he says one corrections staffer failed to be upfront about a series of recent methicillin-resistant Staphylococcus aureus (MRSA) infections at the facility.

“That non-disclosure was far more alarming than being forewarned I needed to be extra careful when inspecting cells because some inmates may be hiding shanks,” Holschwander adds.

Rupert says much of the work takes place during off-hours. If inspections and treatments are during work hours, usually the work is in cells and requires the transfer of prisoners to holding areas or the prison yard.

Sources warn that many inmates play tough and fail to report bed bug problems. Other inmates cry wolf, claiming they’ve been bitten so they can get more yard time. Some suffer from delusional parasitosis (DP). Others don’t want PMPs in their “homes” — in many cases because they’re hiding contraband. Some inmates get cagey at the sight of K9s, not realizing the dogs are trained to sniff out bed bugs, not drugs.

“One facility made me drive my truck back outside the gate because officers feared prisoners would use my hose reel as an escape tool,” Meitler notes.

“To some degree, PMPs are handcuffed regarding what we’re allowed to bring in and use,” Parke says. “Many correctional facilities prohibit cell phones, cameras, screwdrivers and other inspection and control tools commonly used by PMPs.”

Control tool limitations aside, Parke reminds PMPs that money from “the inside” spends just as well on “the outside.”

“I don’t see the bed bug work — be it in correctional facilities or the outside, free world — slowing down anytime soon,” he says. “Ten years ago, bed bugs accounted for less than 5 percent of our business. Last year, bed bug work generated more than 60 percent of our jobs.”

Tips from ‘The Inside’

“In correctional facilities — where staff, inmates and visitors are coming and going, day and night — bed bugs are bound to bite you,” Maj. Arnold says. “We had one case where bed bugs were literally falling off an incoming detainee.” 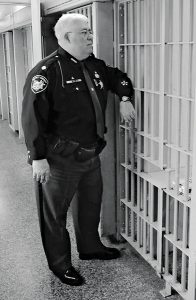 Thankfully, Stark County Jail has strict bed bug prevention protocols. The facility also prescreens inmates, asking: During the past three months, have you been exposed to bed bugs? Do you have any unexplained bites or blisters?

If an infestation is detected, the jail staff bags incoming detainees’ personal belongings, and launders their clothes on the hottest washer and dryer settings before re-bagging them.

According to Maj. Arnold, if an inmate has bed bugs on his or her person, staff should isolate the prisoner in a barren cell or shower. The detainee should remove clothing and footwear, and place everything in a water-soluble bag to be washed and dried on the hottest settings. The inmate should shower thoroughly, and be segregated until he or she can be examined by medical staff and confirmed to be bed bug-free.

Maj. Arnold suggests PMPs advise law enforcement personnel if they suspect a potential bed bug infestation at a location to:

“Communicating to staff, inmates and visitors our ‘Bed Bug Prevention Dos & Don’ts’ is half the battle,” Maj. Arnold concludes. “The other half is staff and PMPs establishing and enforcing the protocols, and remembering that our line of work is part occupation, part vocation.”


Run-in with an infamous inmate 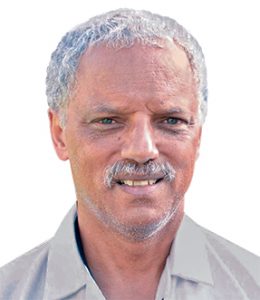 While serving as pest control coordinator for San Quentin State Prison in California during the mid-1980s, Dr. Vernard Lewis tried to mind his own business. But sometimes a run-in with an inmate was unavoidable.

Dr. Lewis’ work often required prisoners to leave their cells so he could conduct pest inspections and treatments. Not all inmates were OK with these temporary transfers.

“One day, I was inspecting the AC — the Adjustment Center, aka ‘The Hole’ — when I heard ‘Man on!’ That was my cue to stand against the wall and stay alert because a high-security prisoner was on the move,” Dr. Lewis recalls.

The prisoner froze when he saw Dr. Lewis’ pesticide sprayer.

“Are you trying to poison me?”

“No, I’m here to inspect and protect,” Dr. Lewis answered. 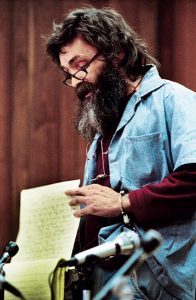 “Three guards to escort this slight man just over 5 ft. tall?” thought Dr. Lewis, as the inmate shuffled past in heavy hand and foot shackles.

“Who are you?” a slightly irked Dr. Lewis replied.

The question drove the inmate mad.

“He was appalled I didn’t know who he was,” Dr. Lewis recalls.

The inmate was Charles Manson, the notorious cult leader who led several of his followers to commit nine horrific murders in the summer of 1969. Now an inmate at California State Prison – Corcoran, Manson is serving nine concurrent life sentences.

“Manson made some odd hand gestures and put a voodoo hex on me. I’m not sure what the hex was, but I think it worked,” Dr. Lewis adds, tongue in cheek. “Not long after Charlie’s hex, I landed the job I really wanted: cooperative extension specialist with UC Berkeley, where I’m at today.” 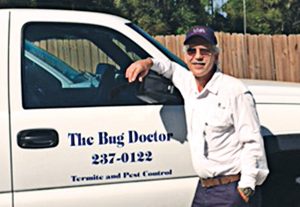 Following are edited excerpts of a blog (PestCemetery.com) by Jerry Schappert, owner of Ocala, Fla.-based The Bug Doctor, about his two decades of experience servicing correctional facilities:

Looking up over the 16-ft. wall, with razor wire glimmering in the sun, I see the clouds floating by and the birds freely flying back and forth. Taunting me, they flit with ease over the rampart that holds me in, and they chirp with a gleeful refrain.

I can go nowhere without eyes upon me and a pat-down. Locking doors make an unmistakable sound but I have no control of any, whether they open or shut.

Inside these walls, time has a different meaning.

In the cells of certain individuals, I learn quickly NOT to spray. The pests are a source of “interest.”

Even my hollow B&G sprayer is opened and checked. I feel guilty: Don’t they trust me?

Pest control inside a prison is so different than anything in the free, open air. I really have to be diplomatic, using as few words as possible, and learn how to be effective with limited tools.

I’m actually saddened to receive the news I’ve treated my last cell. I’ve heard that big metal door lock behind me for the last time. I’ve been released. 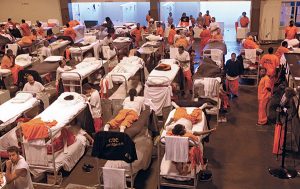 You can reach Editorial Director Marty Whitford at mwhitford@northcostmedia.net or 216-706-3766.