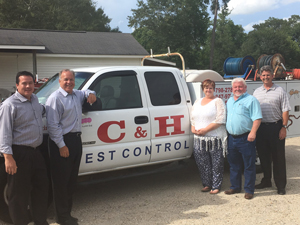 Atlanta-based Arrow Exterminators has acquired 40-year-old C&H Pest Control, based in Picayune, Miss.  This deal establishes a presence for Arrow in the Picayune market and fast-growing markets in St. Tammany Parish on the Northshore of Lake Pontchartrain in Louisiana.

“When we started considering selling our business, we talked with a number of companies, including Arrow,” says owner Darryle Whitfield. “After meeting and talking with them, we knew that our employees and customers would be well cared for and were comfortable in entrusting Arrow with this responsibility.”

C&H will join with the other three Arrow Exterminators offices in the state of Mississippi and will operate as Stark Exterminators.