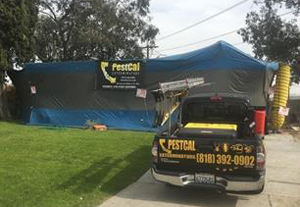 Pest Control Operators of California (PCOC) has announced the winners of the 13th annual Fumigation Banner Bonanza Contest, sponsored by Vikane fumigant. The contest recognizes California fumigators for promoting structural fumigation through signage at job sites. This year, there were a record 64 banner entries.

PestCal Exterminators, Van Nuys, Calif., won first place. The company serves the greater Los Angeles area. The judging panel commented the winning banner was simple and professional and projected trust. Judges also noted the company’s logo and found the bug outline over the state of California to be memorable.

“I designed our company logo and this banner myself,” says Kevin Campos, owner of PestCal Exterminators. “One day, before I started this company, I was driving around and pictured a roach with the state of California. I haven’t seen that done for a logo yet, and I thought it would catch people’s eyes. I drew it up, and that’s the logo that you see today on our banner.”

Campos says he will use the $1,200 prize money for an appreciation party for his employees.

Participating fumigation companies submitted photos of their banners, which included their business name, logo and contact information. A panel of communications specialists judged the banners based upon readability from a distance, professionalism, visual impact and attractiveness.

“We were impressed with the record amount of entries we received this year,” says Heather Kern, global marketing leader for Douglas Products, manufacturer of Vikane. “The judges had the tough job of selecting their top banners based on the contest’s criteria. The contest allows our fumigator partners to take pride in their banners, engage in some friendly competition and promote the value of structural fumigation with Vikane.”