Are you using Snapchat? 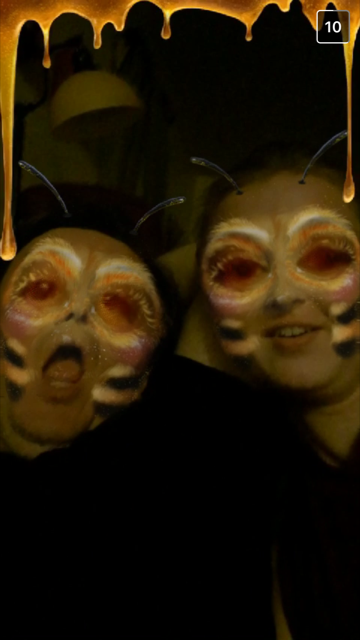 Two otherwise-respectable members of the editor’s family turn into stinging insects, courtesy of a Snapchat filter.

As the parents of two teen-aged girls, my husband and I held off as long as we could regarding allowing them access to the Snapchat social media platform. Because the content disappears within 10 seconds after opening, it’s an ideal way of sending inappropriate images. Of course, you can freeze the image with your camera, so photos that were meant to be fleeting or only to a certain person don’t necessarily end up that way.

Still, our daughters were persistent in the notions that a) they were respectable young women who would use the platform only to send silly photos with friends they knew, and b) not being on this platform was severely cramping their reputations, as it was THE way “everyone” communicates in their social circles. We caved, but only by getting accounts, too, so we were in on their chats.

Is the old “everybody else is doing it” adage a good reason to allow it? Nope, but we came to the conclusion that our daughters deserved some trust (along with a healthy dose of monitoring). Besides, the filters on Snapchat — things like adding puppy ears and noses to people’s heads or swapping two friends’ faces with each other — are so hilarious that we are constantly being shown the photos they send and receive.

I bring this all up because before coming across Marketing Specialist Emma Fitzpatrick’s post, I never thought of Snapchat as something a service business could use. But of course, it can, and Fitzpatrick spells out how.

The caveat to her persuasion of joining the ranks of businesses on Snapchat is that your target audience should be within the 18-34 age range. She notes that 14 percent of users are 35 and over, but I have a sneaking suspicion that the majority of that group is comprised of parents like me joining to monitor what our kids are doing. I could be wrong, of course. Using a filter to turn one’s spouse into a monster zombie, for example, has a special satisfaction.

“I don’t have enough customers in that age range to make it worth my time,” you protest. Ah, but these “youngsters” are growing older and gaining more disposable income by the day. If you’re treating college dorms, for example, why not post a video of a gruesome bed bug infestation, followed by ways they can check their beds and report problems? If you’re going to be exhibiting at a community festival this summer, will you show your company mascot interacting with kids, inviting young families to come meet Bugsy in person? Try swapping faces of your K-9 handler with her termite-sniffing K-9. The bottom line: Absurd, but lighthearted is the approach to take.

Now it’s your turn: Are you using Snapchat to market your business? In what ways? We want to know! Sound off below or email me at hgooch@northcoastmedia.net to discuss.