Merger a go for Dow, DuPont 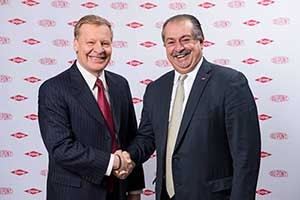 As reported by Pest Management Professional’s sister magazine, Landscape Management, stockholders at both DuPont and Dow Chemical have voted to approve all stockholder proposals necessary to complete the merger of equals transaction. It’s a key milestone in the process to merge the two companies and subsequently pursue the intended spins of three independent companies.

The companies expect the merger transaction to close in the second half of 2016, subject to customary closing conditions, including receipt of regulatory approvals.

“The overwhelming support of Dow and DuPont stockholders to approve this historic merger transaction is a clear testament to the compelling value proposition and enhanced shareholder value that DowDuPont represents,” Andrew Liveris, Dow’s chairman and CEO, said July 27. “Today is a pivotal step toward bringing together these two iconic enterprises, and to the subsequent intended separation into three leading, independent technology and innovation-based science companies that will generate significant benefits for all stakeholders.”

DuPont and Dow intend that, following the completion of the merger, the combined company will pursue the separation of the combined company’s agriculture business, material science business and specialty products business into three independent, publicly traded companies, subject to approval by the DowDuPont board and receipt of any required regulatory approvals.

“We are pleased to receive such strong support from our stockholders, which represents an essential milestone in the combination of our two companies and our intention to subsequently separate into three independent companies,” said Ed Breen, chair and CEO of DuPont. “We are now focused on important next steps toward completing the merger transaction, including working with regulators in the appropriate jurisdictions. We are confident that this merger will create long-term, sustainable value for stockholders and superior solutions and choices for customers.”

The final voting results on all agenda items for each company’s special meeting will be filed with the SEC in separate Form 8-Ks and will also be available at on both Dow and DuPont websites, after certification by each company’s inspector of elections.