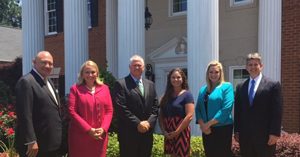 Atlanta-based Arrow Exterminators recently presented Henley Sawicki, the 2016 River Ridge High School Teacher of the Year, with a gift as a token of appreciation for allowing Arrow to have a presence in her classroom. Sawicki received her biology and secondary education degrees from Kennesaw State University, and currently teaches AP Biology and AP Zoology. She will be starting River Ridge’s first post-AP Advanced Genetics and DNA Research class this school year.

Arrow Exterminators has partnered in numerous capacities with River Ridge High School through athletic sponsorships, Career Days, science courses, and even taught an in-house “field trip” where students learned about Termite DNA as well as parasitic insects. River Ridge has also had numerous students who have participated in Arrow’s Summer paid internship program, working in numerous departments throughout the company.

Additionally, Arrow made a monetary donation to Sawicki’s classroom to help purchase lab resources. Sawicki invites Arrow to her classroom each year to help teach science-related programs. This past year, she included Arrow in the Science Department’s special Halloween event, where Arrow brought along some real-life insects, including millipedes, Madagascar Hissing Cockroaches, and a Tarantula named Sheldon.

“Mrs. Sawicki is one of those teachers that kids do not forget because her love for the sciences is contagious,” says Shay Runion, chief human resources officer and senior vice president of professional development at Arrow Exterminators. “The pest control industry and what we do is science at its best. We are investigating, inspecting, monitoring, collecting data and presenting a solution to our customers, and we do this by considering the insect biology, behavior, environment, and habitat. Our industry is full of opportunities for students looking to find a career, and we are thankful for Mrs. Sawicki and Principal Darrell Herring for allowing Arrow to have a presence in their school.”