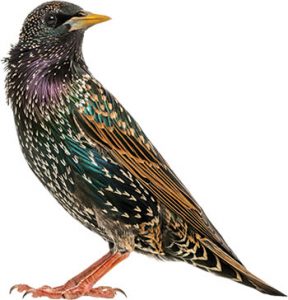 In his play Henry IV, Part I, William Shakespeare glorified starlings for their ability to be taught the name of a person and repeat it over and over to the king. Believe it or not, Shakespeare is responsible for one of the U.S.’s biggest bird nuisance species, the European starling (Sturnus vulgaris). In 1890, Eugene Schieffelin, an ardent admirer of the playwright, released 60 starlings in New York’s Central Park. His idea was that he’d bring a piece of the Old World to the New World.

Boy, did he ever. Between that initial release and a second one, of 40 starlings, the following year (both groups imported from England), the North American starling population has since ballooned to an estimated 200 million.

Starlings are a major pest in agriculture, requiring many areas to be netted to save fruit. In urban settings, the birds roost at night in flocks of thousands, returning to the same location again and again. Their droppings create a health and aesthetic problem.

Because of the public’s sensitivity to their removal, in addition to starling behavior that includes creating tight flocks, a “soft, green management” approach is recommended. Cutting about 20 percent of the branches on the trees starlings target leaves the birds without enough space to roost, so they leave.

Birds hinder an airplane’s ability to land and take off from the runways of some of the country’s most popular airports. Similarly, yachts, football stadiums, billboards and other not-so-usual spaces can create bird management challenges.

As technology develops in fields having absolutely nothing to do with the birds, the need for bird management increases. Proactive pest management professionals (PMPs) are seeking — and obtaining — this business. Situational examples include:

You have to specialize in different types of bird management (Editor’s Note: See the March 2016 issue of Pest Management Professional for several best management practices in bird service). Regardless of your approach, your technicians must be skilled, well trained and dedicated to their work. Safety training for working at extreme heights, working with ladders around high-tension wires and protection from disease organisms associated with birds are all necessary. If you don’t want to get involved, pass the work onto a PMP specialist who does. They’ll be happy to profit from the work.

Contributor Dr. Austin M. Frishman, BCE-Emeritus and a PMP Hall of Famer, can be reached at PMPEditor@northcoastmedia.net.