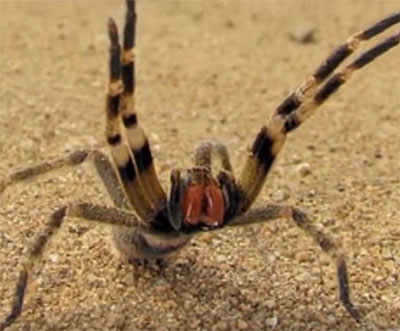 While unpacking groceries, a woman in Leicester, England, was greeted by about a dozen Brazilian wandering spiders (Phoneutria fera) on a bunch of bananas.

Forklift truck driver Ashley Gamble told Leicester Mercury that his partner Sophia Newcombe noticed a small, white cocoon on the fruit. She then dropped the bananas in a panic, and dozens of the world’s most venomous spider (according to Guinness World Records) scattered across the floor.

Gamble told The Sun he initially tried to use the hoover to suck up the arachnids, but he fears some may have escaped.

“It was like something out of a horror movie,” he told the newspaper.

JG Pest Control’s Paul Gale said the company was called to an account for the wandering spider in 2014 in South London. And in 2005, Bridgwater, England, chef Matthew Stevens survived a bite from one of the deadly spiders that also were found in a banana bunch.

The pest management professionals sealed off and directed a heater into each room and ensure the temperature is at least 140° in order to kill the spiders, which are also known as armed spiders or banana spiders.

Guinness World Records states that although the Brazilian wandering spider venom is the most toxic, an effective anti-venom is available and few fatalities occur.

Invest in the details to aid spider control efforts