A video of a huntsman spider carrying a dead mouse up the sides of a refrigerator in Australia has now been viewed more than 22 million times.

Jason Wormal, a tradesman from Coppabella in Queensland, Australia, says he was about to leave for work when his neighbor asked him to take a look at the mouse-carrying spider, according to Wormal’s Facebook page.

It is unusual for spiders to target these pests, Graham Milledge, manager of the Australian Museum’s arachnology collection, tells the Guardian.

“I would be very surprised if a huntsman would attack a mouse, and even if it did, that the venom would be sufficient to kill it fast enough for the spider to still have hold of it,” Smith says. “I am also suspicious because the mouse’s tail looks quite stiff – as though it has been dead some time.”

Regardless, the strength of the spider is polarizing, the video’s number of views shows.

The spider still is alive and well, Wormal says on his Facebook page.

“OK guys, so just letting you all know that the spider is fine,” he says. “We have named him Hermie, we have adopted him, and he is now running his own extermination business out of our town, Coppabella. Oh, and he is now paying rent. LOL.”

Hermie has become quite the famous spider, as social media comments regarding the spider surface. 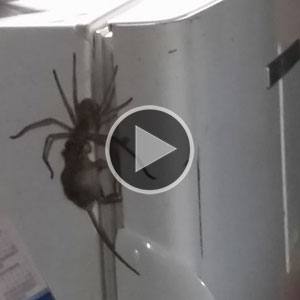 Six-eyed spiders are not all same species