How rodent control has evolved

Since I started as a pest management technician, about 56 years ago, there have been many changes in rodent management.

We were not called pest management specialists back then. We were called exterminators, and we exterminated. To us, success was gauged in terms of how many rodents we killed. In some accounts, we killed rodents every time we came.

We used rodenticide and would pick up the visible dead rodents. Sometimes it helped to find them by following the smell or the blow flies.

We would sometimes tell the client to do some rodent proofing. In almost all cases, they did not and we continued to kill rodents month after month. In restaurants, we would sometimes go weekly.

On landfills, we killed thousands of rats with zinc phosphate mixed in with canned cat food. We would carry about 15 to 20 lbs. of bait in a bucket and sling it with a large spoon. We started at 5 p.m. and worked until dark. The landfill was closed on the day we worked. As it began getting dark, three of us — each about 40 yds. apart — worked as a team as we traversed the top of the landfill. We could see and hear rats moving.

Six months later, we would go back and do it again. Each time we felt like heroes. Sometimes we even piled up the dead rats and took pictures.

Our rat bait stations often consisted of wood, and we used small open “Pitter Platters” to place more bait in the form of seeds or small pellets. Where convenient, we threw mouse bait under refrigerators and behind furniture. The mouse bait consisted of strychnine seeds.

In attics, for both mice and rats, we made toss packs of rodent bait. From the opening in the attic, we tossed the packets in different directions.

How did so many go so far, knowing so little? 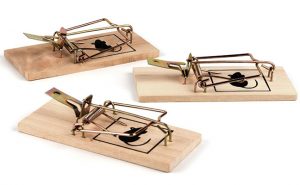 In today’s world, none of this would be legal. Nor should it be. As the ad says, “We’ve come a long way, baby.” Just how far? We once depended 100 percent on rodenticides. Snap traps were more or less left to the public.

As a child growing up on a chicken farm, I recall how when the coops were cleaned (about twice a year), there was a pile of chicken manure a few feet deep present on the floor. Rats burrowed in the manure. As the manure was removed, the rats ran along the walls. If you timed it correctly, you could scoop up a rat, flip it in the air and smack it to death with the shovel. My uncle was pretty good at it. Mainly, I watched. Little did I know it was my first lesson in pest management.

Dichlorodiphenyltrichloroethane (DDT) tracking powder was an ace in the hole for knocking out mice in wall voids. Aside from the product’s now-banned status, the remaining product in wall voids promotes a problem for concerned electricians and other workers who open walls to do their service work. Who would have thought that the discovery of DDT — resulting in the issuing of the 1948 Nobel Prize in Medicine to Pest Management Professional (PMP) Hall of Famer Paul Müller — would decades later become an environmental issue?

What about sodium fluoroacetate (aka 1080)? We used it in severe rat situations. When finished, we burned not only the dead rodents, but also the cups used to hold the liquid rodenticide and the gloves.

Who knew of the danger from rodent droppings, urine or rodent hairs? Today, we understand that mice are a major cause, along with cockroaches, in triggering asthmatic attacks in inner-city children. Recent articles in medical publications explain the instances of other disease organisms associated with rodent droppings.

Also alarming is the species of fleas now found on rats in New York City. The potential for spreading disease greatly increases with the presence of these fleas. The U.S. Centers for Disease Control and Prevention (CDC) is concerned about this.

This opens up another avenue of work for our industry: the need for removing and detoxifying the contamination left from rodents. How many dropped ceilings, crawlspaces and attics need restoration work?

Where are we today, and where we are headed

Now go back and reread the first portion of this article, and see how far we have come. Today, we approach rodent management as a science, utilizing the state of the technology, understanding public health issues and knowing our responsibility to be environmentally aware of our actions’ consequences.

This is called progress and I like it! And I’m proud that many of my former students — including fellow PMP Hall of Famer Dr. Bobby Corrigan — have helped pioneer these changes.

Contributor Dr. Austin Frishman, BCE-Emeritus and a PMP Hall of Famer, can be reached at PMPEditor@northcoastmedia.net.