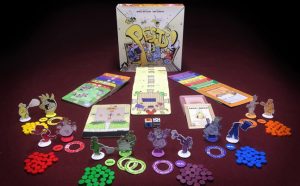 Cleveland resident Michael McFarland had an ant problem and called on a pest management firm to do something about it. The resulting experience of watching the technician inspect and treat his home fascinated McFarland, who also happens to be a co-owner of Spontaneously Combustible Creations, a record label with a recording studio that also develops and publishes tabletop games. Fascination led to inspiration, which led to a new project currently available on Kickstarter: The board game “Pests!”

“You play as an Exterminator who specializes in the elimination of a particular type of Pest: Flying Bugs, Creepy Crawlies, Winged Beasts, Vicious Vermin, Unwanted Guests, or Spooky Specters,” the official description reads on Spontaneously Combustible’s game page. “You’ve been hired to clear your type of pests out of a house, but when you arrive, you discover that the house has other types of infestations. The homeowner’s hired several other exterminators, each with a different specialty, and only the first to complete their job will get paid.”

Is it realistic? Nope. Is it in good fun? Absolutely — and any positive pest industry mention in popular culture is a good thing. The player piece professionals all wear Haz-Mat suits, which you could say is overkill, but then again, the vicious beasts they’re battling seem to warrant the extra protection.

McFarland launched the Kickstarter Feb. 21, and it currently is 67 percent funded. You also can play-test the beta version, which means you play a final-draft version of the game for free, and in return give feedback to Spontaneously Combustible so they can tweak its final, large-scale manufacturing format. It could be a fun addition to your next team-building meeting!