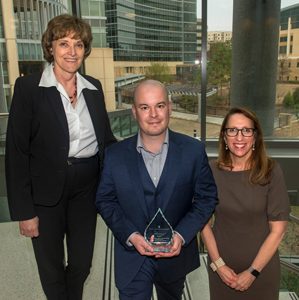 Last week, Bayer was presented an award by representatives from the U.S. Centers for Disease Control and Prevention (CDC) Foundation for the company’s support in the fight against Zika. Bayer was one of a handful of industry organizations that co-sponsored a summit that the CDC Foundation hosted in Atlanta with various experts to discuss vector control strategies for Aedes aegypti mosquitoes, the carrier of Zika virus. (Editor’s Note: PMP’s April issue features exclusive coverage of this conference from Rollins Inc.’s Dr. Mark Beavers.)

Dr. Kurt Vandock, a vector biologist and the head of public health for the Bayer U.S. Environmental Science business, accepted the award on behalf of Bayer, which made financial contributions to both this event and a previous one held in 2016.

“Bayer is proud to join CDC in combating global health threats like vector-borne diseases,” said Dr. Vandock. “I was honored to accept this award and to sit in on last week’s summit, and was very encouraged by the discussion. Bayer is continuing to invest in innovations to help control Aedes aegypti and other dangerous species of mosquito and is passionate about doing our part to help protect public health.”