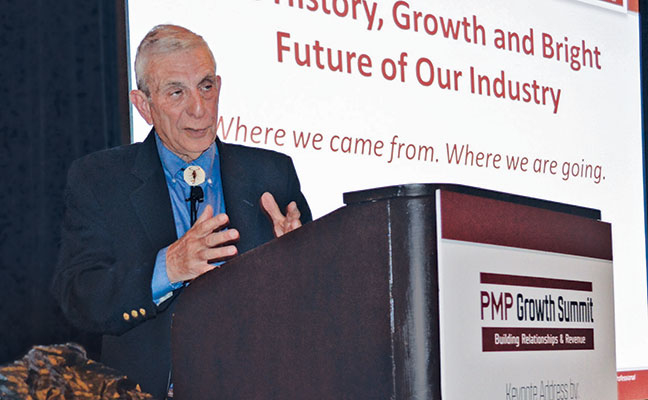 Longtime Pest Management Professional (PMP) columnist Dr. Austin M. Frishman, BCE-Emeritus, PMP Hall of Fame Class of 2002, is known for inspiring and mentoring generations of pest management professionals (PMPs). Whether they are former students of his from Farmindale State College, Purdue or Cornell; attendees who rub elbows with him at an industry conference; or technicians at accounts he is called in to troubleshoot, Dr. Frishman shares his wisdom on pests and their control as naturally as the sun warms Orlando, Fla. — which happens to be the city in which he delivered the first-ever PMP Growth Summit keynote presentation on Jan. 31, 2017.

Presentations by “Doc” aren’t so much linear as they are pure storytelling, with humor and practical tips shared in equal measure. The 76-year-old opened with a tale of growing up in poverty on a chicken farm during World War II: “One day, my uncle brought home this amazing thing and put it in the window. We didn’t have any more flies. It was called a screen.”

Doc gave a compact overview of the industry’s history, from its predominantly Jewish roots (German Jews had to kill so many rats for the bergmeister, or else they had to pay a big fine and go to jail; thus, they soon became experts at the task), culminating in the Civil War era’s Solomon Rose following Sherman’s March and clearing out any post-battle rats and fleas to prevent plague.

Doc then skipped ahead to fellow PMP Hall of Famer J.J. Davis, a Purdue University entomology professor who set tongues wagging among academics because he reached out to exterminators to share knowledge and technique. “Extension people hated exterminators back then, because they thought we were taking business from them and were crooks,” Doc said. “At the time, I was getting a master’s degree in livestock entomology at Cornell, but I wanted to go to Purdue. I was told that pest controllers only want to leave the pests so they can come back.”

Doc wisely ignored the detractors and ended up being mentored by Prof. Davis for more than a year. “Yet in many ways, the industry is ahead of the teachers,” he pointed out. “They know when new pests come in, new techniques and so forth.”

World War II brought a new wave of pest controllers and new techniques. The ’50s gave way to the ’60s — and the rise of Rachel Carson and her infamous book, Silent Spring. But Doc reported that fellow PMP Hall of Famer Dr. John Osmun maintained “she did an important thing for our industry” in making us sit up and take notice of regulations and more targeted applications.

For the past 50 years or so, Doc said, PMPs have been providing peace of mind: “Anyone who tells you pest management isn’t important doesn’t understand what it’s about.”

Doc also looked ahead, commenting on computer monitors that can tell which floor of an apartment building your technician is inspecting in real time and the use of drones to spray a bald-faced hornet nest high in a tree. Yet he warned that while mobile technology is nice and efficient, “don’t forget to get your hands dirty. Remember the child bitten by rats.”

Words of wisdom from Gene White