After launching Fort Worth Pest & Termite Services in 1998, it soon became apparent to him that his Arlington, Texas-based company was doing a lot of bird control work. So Beaman decided to spin off the bird jobs into Texas Bird Services and operate them as separate companies.

“The bird side of the company is now much bigger than the pest side,” he admits, noting bat work also goes into the winged pest company mix.

Beaman has been doing bird work for nearly 30 years, and for the past six years, Texas Bird Services has been growing at a rate of nearly 30 percent annually. It services not only the Lone Star state, but accounts in Oklahoma, New Mexico, Wyoming, Idaho, Tennessee, Indiana and Pennsylvania.

“Most of my bird knowledge has come from field experience,” he says. “Unfortunately, not a lot of people are educated on bird biology, but I acquired knowledge on how to keep birds out of structures.”

Beaman does little advertising, so his growth has come mostly by word-of-mouth. Its only other marketing outlets are its website and a mailable brochure. 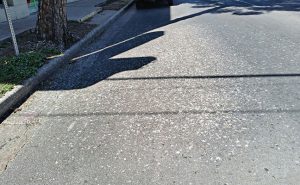 Grackle droppings are both unsightly and a health hazard on a residential street.
Photo: Rodney Beaman

“We have contracts with cities and downtown improvement districts where we move migratory birds from their trees,” Beaman says, referring to species ranging from Canada geese to starlings to grackles. “Here in Texas, we are in a migratory flyway zone, where all the migratory birds pass through North and Central Texas on their way south.”

Beaman says thousands of birds will stop and roost in trees along their way.

“We use 20 to 40 people, depending on the season, to keep those birds from landing in the trees for our customers,” he explains, noting the team uses high-powered lasers. “We shoot the lasers into the trees, which confuses the birds and they move on.”

The team achieves the greatest success just before sundown, Beaman says, because that’s when the majority of the birds move into the trees all at once. Texas Bird Services does this type of work in big metropolitan downtown areas, as well as at a number of large college and corporate campuses.

“We can see when migratory birds start to move, and we know when they are going to be in Houston or Dallas, for example,” he says. “If we were going to draw our own migratory bird map, it would look quite different than a university map.”

Texas Bird Services also is called out to places like power plants and landfills, where the company will employ a technician to stay at the site year-round and perform bird abatement.

“We use baiting, trapping, nest removal and harvesting in instances where the birds can be legally removed,” Beaman says.
The company also performs this type of work at airplane hangars, military establishments and transportation facilities.

This is Texas Bird Services’ biggest division, and uses netting, spikes and electrified tracks to control birds that are more stationary, such as pigeons and sparrows.

“On some projects, it’s more about construction than bird work,” Beaman says. “We are there like plumbers or electricians, in that we have to have some of the same safety gear and the same [U.S. Occupational Safety and Health Administration, or] OSHA training. We go through all of the requirements other trades go through, but they are putting up lights, for example, while we are putting up bird netting.”

For certain aspects of its bird management, Texas Bird Services uses a wide variety of high-reach equipment. All of its installers are aerial lift-certified. And while general pest work is the focus of sibling company Fort Worth Pest & Termite Services, Texas Bird Services is also licensed and regulated by the Texas Department of Agriculture for structural pest control services, so it can use pesticides to do all of its work when the need arises.