As reported in “USFS 2016 report marks new era for termiticide tests,” the number of products installed in the U.S. Department of Agriculture’s Forest Service (USFS) Termiticide Testing Program each year is cyclical. In recent years, the installation of new products has been reduced. We are optimistic that the low point in new installations has passed, however, and we are beginning to move toward a time of increased installations — and thus additional product choices for pest management professionals (PMPs).

In 2016, the USFS Termiticide Testing Program installed one new product at two sites, completing the study started in late 2015. Currently, three candidate termiticides are being evaluated in the testing program. 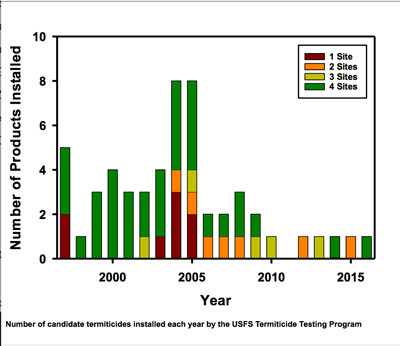 Whatever the reason is for withdrawal, the USFS policy has been to not report on any products that do not obtain federal registration. This is to prevent confusion and off-label use of agricultural products that share the same active ingredient as the withdrawn termiticide product. As a result, the numbers in Fig. 1 will likely always be greater than the actual number of reported products in the tables below. (View Table 1 or Table 2).

The loss of Santa Rita

The U.S. Environmental Protection Agency (EPA) provides guidance for the efficacy testing requirements for federal registration in two documents, OPPTS 810.3600 and the Pesticide Registration Notice 96-7. The methods required by EPA are the same as those developed by the USFS during our years of efficacy testing. Locations for these studies have varied over the years, but at present there are three nationwide testing sites in the continental U.S.:

Prior to 2016, the USFS Termiticide Testing Program had been using four field sites since the early 1970s. Our test site in Arizona, located on the Santa Rita Experimental Range (SRER) south of Tucson, had been used as part of these studies since 1965. Originally set aside by President Theodore Roosevelt as a federal experimental range, the SRER was moved to state ownership in 1988. Our long-term study sites were allowed to continue in cooperation with the University of Arizona, which oversaw the SRER for the state of Arizona.

Unfortunately, during recent negotiations to acquire more land for testing on the SRER, the USFS and the University of Arizona could not come to an agreement. As a result, USFS lost access to the SRER, including the areas of studies still under evaluation. Companies with products in testing for registration were notified and directed to the EPA for direction on how to handle the missing data for registration packages. The USFS is currently looking into other locations to use in place of the SRER in southern Arizona, but this may take some time, as the land would need vetting for termite activity and species present.

The EPA in its Product Performance Test Guideline, OPPTS 810.3600, specifies evaluations of soil-applied termiticides. There are currently two accepted protocols for testing these products:

Ten replicates of each concentration, including water-only controls, are installed for each candidate termiticide in each of the three national field sites.

For the groundboard test, a 17-inch square area is cleared of debris, roots and rocks and treated with the candidate termiticide. After drying, a 6-inch square pine sapwood board is centered on the exposed, termiticide-treated soil, and held in place with a brick.

For the concrete slab test, the treated plot area is also 17-inch square and cleared as described above. After treatment, the soil is covered by a polyethylene vapor barrier, and a 21-inch square concrete slab is poured around a 4-inch-diameter PVC pipe placed at the center. Once the concrete has set, the vapor barrier is cut out and removed from the bottom of the pipe, and a 3.5 by 2.5 by 1.5-inch rectangular pine sapwood block is placed on the treated soil at the bottom of the pipe. To prevent weathering of the treated soil, a PVC cap is placed on the pipe.

For both methods, solutions of candidate termiticides are applied to the soil at the pre-construction rate of 1 gallon per 10 sq. ft. in both test types. For each plot, the wood is evaluated for termite damage annually using a simple scale called the Gulfport scale, and the presence or absence of live termites infesting test blocks or boards is also noted.

For several years, the testing program has included extra groundboard and concrete slab plots for pesticide residue analysis at each concentration level of a newly installed product. Soil sample cores are 1 inch wide and 4 inches long, collected both after installation and on each subsequent year of the study. The groundboard and concrete slab plots designated for soil samples, however, have no wood blocks in the plots so they are not attractive to termites and are not read for termite damage.

Tables 1 and 2 provide repellent and nonrepellent termiticide evaluation results collected through 2016. In 2015, the Altriset (a suspended concentrate, or SC formulation of chlorantraniliprole) study was closed. No new products have entered the market this year. Thus, there are no new products whose data can be revealed in this year’s report. The tables and data in this report are exactly the same as the previous report (PMP, April 2016), as all of our newly collected data are for as-yet-unregistered products.

The USDA-FS Termiticide Testing Program has served the public and pest management industry for nearly eight decades, providing unbiased candidate termiticide efficacy data for state and federal regulators. The testing program has provided performance data for all termiticides currently registered in the United States. These reports provide efficacy data of registered termiticides to the pest management industry, pesticide manufacturers, government regulators, and the American consumer. By making this data publicly available, the USFS enables the public to make informed decisions concerning the protection of the wood framing in their homes and outdoor structures from termite damage. For the foreseeable future, the USFS Termiticide Testing Program will continue to provide information about these products. 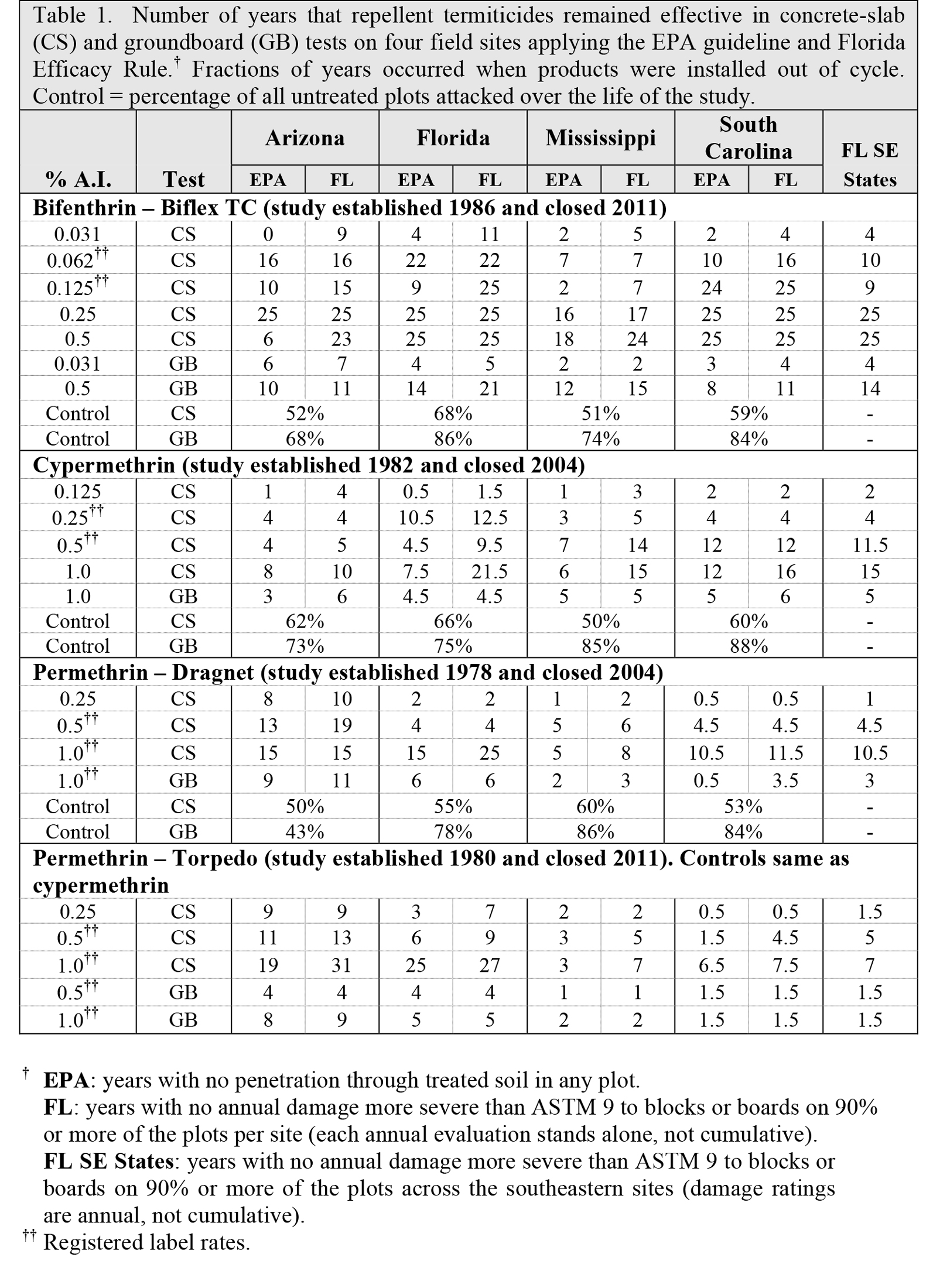 The future of termite control