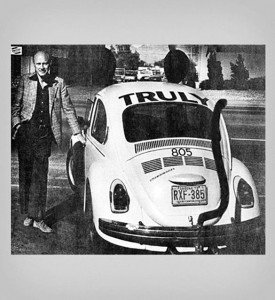 In this archive photo, Truly David Nolen stands with the 1961 VW Beetle that started the Mouse Car fleet — a company tradition that continues today with modern Beetles, and permeates the company’s marketing, logo, etc. Photo: Truly Nolen of America

Nolen, son of 2006 PMP Hall of Famer Truly Wheatfield Nolen, is best known for founding Tucson, Ariz.-based Truly Nolen of America and Orlando, Fla.-based Truly Nolen International, both of which feature a fleet of yellow “mouse cars” and antique vehicles. Today, there are more than 320 Truly Nolen offices in 63 countries.

Nolen’s passions including sailing, piloting airplanes and collecting antique and unusual cars. In 1944, the Baltimore Sun ran a photo of 16-year-old Nolen aboard his small sailboat, after he successfully navigated from Miami Beach, Fla., to Annapolis, Md. He married his wife Vickie on his favorite sailboat, the Ticonderoga, and could always find a reason to fly or sail.

Nolen’s “rules to live by” were “Find humor in everything, even adversity. Stay positive and persistent to the extreme. Work hard, play hard. Do what you want to, not just to make money. Don’t be afraid to be different – take a chance!” His sense of humor was well known, often quoting films by Mel Brooks or his personal favorite, “Airplane!”

Much of Nolen’s life was memorialized in his 2005 autobiography, Truly Original. In it, friend and colleague Norm Ehmann, a 1999 PMP Hall of Famer, wrote, “Truly Nolen is a giant among men. Polio confined him to an iron lung from which there was no escape. He escaped. They told him he would never walk again. He not only walks, but he takes great pleasure in flying his own airplane. His ideas of growing a business didn’t match his father’s style so he traveled 3,000 miles west and started his own business, which is now one of the largest privately owned pest control companies in the United States with franchises around the world.”

A private service will be held Friday, April 21, at Temple Shalom in Naples, Fla.