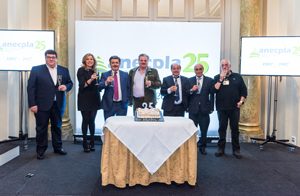 The Spanish Association of Environmental Health Companies (ANECPLA) has begun the celebration of its anniversary. The association celebrates its first quarter of a century defending the interests of environmental health and pest control companies.

Based in Madrid, ANECPLA was founded in 1992 to give a voice to the environmental sanitation and pest control sectors. Association objectives include: to be the permanent and effective union of entrepreneurs and professionals; to protect and promote common commercial interests; to be a communication channel between the administration and the sector; to collaborate with national and international organizations; and to professionalize the industry through training. ANECPLA brings together 465 companies, which represent approximately 85 percent of the industry in Spain.

“The representation of an association is measured by the number of associates, and ANECPLA has been growing in representation progressively in these 25 years, thanks to the trust of our members,” says ANECPLA Managing Director, Milagros Fernández de Lezeta.

At the end of 2015, ANECPLA created the Center for Environmental Health Studies (CEDESAM), which is credited for helping the industry become better trained. The organization is also focused on educating the public on the importance of environmental health, and their members’ role in providing it — from the importance of pest control to education on proper treatment and prevention, to current regulations.

ANECPLA is a member of the Confederation of European Pest Control Associations (CEPA), and chaired the organization from 2000 to 2002. Currently, it is represented on CEPA’s management committee.