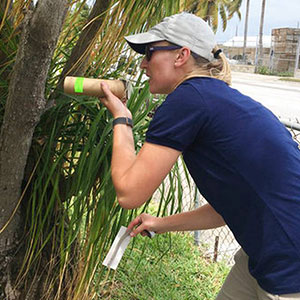 The male mosquitoes infected with Wolbachia — which is harmless to humans — will mate with female mosquitoes, who then become infected and don’t survive adulthood.

Staff members released the infected mosquitoes by blowing through the cardboard tubes the mosquitoes were transported in.

“Keys officials are still considering a separate test of mosquitoes genetically modified by the British biotech firm Oxitec to produce Aedes aegypti offspring that die outside a lab,” says The Charlotte Observer. “The U.S. Food and Drug Administration initially approved a trial in a residential neighborhood near Key West, saying the test would not significantly affect the environment, but outrage from anti-GMO activists and residents forced the district to find a new location.”

MosquitoMate is awaiting permits from the U.S. Environmental Protection Agency to sell Asian tiger mosquitoes (A. albopictus) infected with Wolbachia as a pest control service, according to the newspaper.