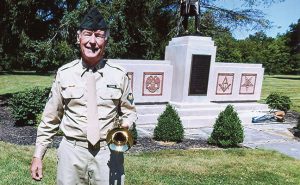 John W. Young still fits into his U.S. Army uniform, so he wears it when appropriate.
Photo courtesy of John W. Young.

“Taps’ is a final salute to a veteran.”

So says John W. Young, the retired president of Cleveland-based Speed Exterminating. He plays the bugle call, also known as “Butterfield’s Lullaby” and “Day is Done,” several dozen times a year in recognition of America’s veterans.

John W., 80, was president of Speed Exterminating from 1972-1998, after which he turned the reins over to his son, John Young. He says the company had an excellent succession plan and “never missed a beat.”

John and his wife, Jaclyn, are Speed Exterminating’s fourth-generation owners. John Warren Speed started the company in 1908 as J.W. Speed Rat and Insect Exterminator Co. Speed turned the company over to his daughter Helen and her husband, Larry Young — John W.’s parents.

Following retirement, John W. started looking for things to do. He hit upon the idea of playing “Taps” to honor veterans at their funerals and for community events. He found an outfit called Bugles Across America and joined the volunteer organization. 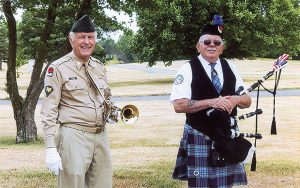 John W. Young (left) and Robert Durrach are ready for the next ceremony.
Photo courtesy of John W. Young.

To his surprise, John W. found that his old Army uniform still fit him, even though he last stepped out of it in 1962. He now wears it whenever he performs.

“No money changes hands,” John W. confirms regarding playing the call. “There are some buglers who charge for playing ‘Taps,’ but I have never charged anybody anything.”

John W. also is affiliated with the Joint Veterans Honor Guard, which anyone can contact to request attendance at a veteran’s funeral.

John W. says word-of-mouth also often gets him gigs for playing “Taps.” Most recently, he played it on Sept. 11 at downtown Cleveland’s Old Stone Church as part of the day’s commemoration events. Cleveland Police recently revived its Veterans Day Parade tradition, and on Nov. 11, John W. played in the rotunda of Cleveland’s City Hall after the parade.

John W., a graduate of Ohio’s Miami University, played the trumpet in high school, but not college.

He only picked up the instrument again when he joined Bugles Across America.

“Now, I practice every day because you can ‘lose your lip’ very quickly,” he says. While “Taps” is just 24 notes, John W. says it still calls for a lot of practice.

Editor-at-Large Jerry Mix can be reached at pmpeditor@northcoastmedia.net.

Bug Busters gives back to veterans, recognized as PestVets company