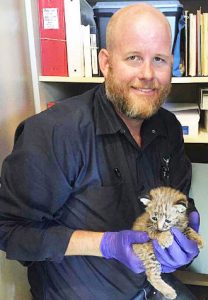 An Arizona pest management professional (PMP) responded to a homeowner’s call for a bird stuck in their chimney, only to find two mammals inside: baby bobcats.

Josh Burton, general manager of Cummings Termite & Pest Control, told fhtimes.com that while the company doesn’t focus on bird work, the customer is the top priority.

“We don’t normally get into that stuff, but we don’t back away from anything,” Burton said. “It’s one of those things that, if we have the time, we will try to accommodate because we are in the pest control business. It doesn’t mean we are only about exterminating anything we find.”

This call in particular was one of those instances where the company continued to accommodate the customer after a surprising discovery.

“When you get called like this, you’re acting as an investigator,” Burton said.

The customer told Burton he heard the bird sounds coming from the fireplace for about two days. But when he opened the fireplace access panel, he saw the two kittens.

When the customer said he did not own cats, Burton noticed tips on the animals’ ears and their spotted fur, and realized they were bobcat kittens.

He and company owner Nathan Watters found a structural default cavity on the roof, where they suspect a mother bobcat hid her kittens.

“They found their way through a little hole and once they got in, they ping-ponged their way down,” Burton said.

Taking advice from the Arizona Fish and Game Department, Burton touched the kittens as minimally as possible and put them in a cardboard box outside, in hopes the mother would hear the cries and return. When the mother didn’t return after six hours, they surrendered them to Southwest Wildlife Conservation Center in Scottsdale.