An interview with a cat flea (Ctenocephalides felis) 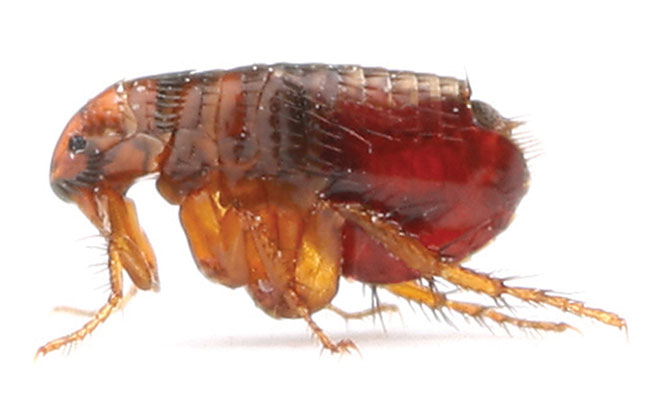 Pest Management Professional (PMP): Pardon me, is now still a good time for our interview?

CF: Yessum! I’m fixin’ to stake my claim on this here dog, but I reckon I can take a bit of time out for you.

CF: [guffaws] Where are we, Europe? That’s where you’ll find most dog fleas. We cat fleas are just about everywhere throughout North America — on cats and dogs.

CF: Aw, shucks now, that’s only when we can’t find a furrier host. We gotta get that bloodmeal one way or t’other when we’re producing eggs.

PMP: I don’t mean to stare, but your physique is just… wow. You’re only about 2 mm long, but so darn flat, side to side!

CF: Bless your heart. You oughta see me when I’m engorged! I’m fat as a tick, ha! But yeah, typically, I’m skinny as a rail ’cause it makes it easier to move among the hair and fur. My hind legs are super-strong for the same reason. I’m not one to brag, but did you know I can jump about 7 in. high and 13 in. long? I don’t even have to work out, I’m just born that way. Well, I was “born” as an egg, and then I went through nymphal and larval and pupal stages…

PMP: Speaking of flea eggs, I understand they’re nearly impossible to see when they fall off a pet’s fur and onto the ground.

CF: Yep. Grass, pet bedding, carpet — we just need somewhere nice and soft to land and hang out until we emerge as larvae.

PMP: But once they emerged as larvae, was there anything for them to eat?

CF: Boy howdy, there was! Just like the rest of us as young larvae, their main diet was flea dirt.

CF: [sighs at the ignorance] Dried adult cat flea fecal matter that fell off the pet. It’s like manna from the sky. It nourished us back in the day, when we were larvae, until it was time to spin our silk pupal cocoons.

CF: No, better than that! Cat flea cocoons are sticky on the outside, so dirt and debris just glommed onto it, giving us camouflage as we transformed into pupae. Oh, those were the days — about 20 to 60 days before we became adults. Also, we’re the top dog when it comes to waiting. Heck, I’ve got cousins whose pupae were forgotten about in a house where the hosts moved away.

The house was empty for months, and they just kind of snoozed through it all until the new owners came. Once they caught whiffs of carbon dioxide, felt warm bodies close by, and felt the vibrations stir up again as the people and pets stomped around, woooo-whee! It was time to emerge from the cocoons and par-tay!

PMP: Sounds cool. But your species is a little bit dangerous, what with the connection to transmitting plague, murine typhus and even actual tapeworms to humans.

PMP: What about the accusations of allergy and rash?

CF: You got me there. But y’all seem to be fighting back pretty hard in recent years. There’s that stuff folks put on the backs of dogs and cats that makes us sterile [shudders]. Sometimes, we see professionals come in with vacuum cleaners, and even sprayers. When we see those folks come in, we need to skedaddle. And when they tell the house owners about washing pets and stuff in warm water [shakes head sadly], well, we get about as nervous as a long-tailed cat in a room full of rocking chairs.

PMP: I wish I knew what purpose you served in the ecosystem, besides being a pest.

CF: [shrugs] It’s been said we provide a food source for birds and the like. Plus, as my sainted granny used to say, “A reasonable amount of fleas is good for a dog — they keep him f’m broodin’ on bein’ a dog.”

PMP: Wait a minute, that’s actually a quote from David Harum: A Story of American Life by Edward Noyes Westcott.