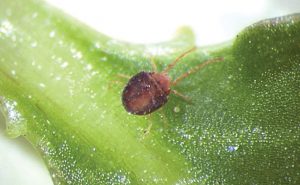 Clover mites (Bryobia praetiosa, and certain other Bryobia spp.) comprises one of several turf and ornamental pests covered in Chapter 15 of the Truman’s Guide, “Occasional Invaders.” But unlike chinch bugs, centipedes, boxelder bugs or other yard pests, a clover mite home invasion can be triggered on a warm, sunny day following a spring shower, where new lawns have been established and where a heavy growth of succulent, well-fertilized grass exists close to foundation walls.

The dark-red mites are smaller than a pinhead. They have pink front legs that extend forward and are as two to three times longer than the other six pink-colored legs.

Clover mites often occur in large numbers. Although they do not bite or cause damage, they can annoy the household — just by their presence or worse, by leaving red stains when crushed on walls or curtains. Despite their common name, they do not feed exclusively on clover. They attack a number of grasses and common plants. Migration into homes is triggered by overpopulation or by the onset of unfavorable feeding conditions (drought or cold weather, for example).

Adult mites lay eggs in the cracks in concrete foundations, inside exterior walls, or on the underside of bark at the base of trees. Mature mites frequently spend the winter within exterior walls of houses. They are inactive when temperatures are extremely hot or cold, but during even brief periods of warm weather in late winter/early spring, they migrate both to the outside and inside walls of the house.

Like lady beetles and other outdoor-originating pests, migrations are particularly noticeable on the south and west sides of buildings because of the sun’s direct warming effect. The mites usually are noticeable around windows, but they may overrun the entire structure. Heavy migrations into houses also are common in early summer and fall.

Tips for treating and/or preventing an infestation include:

A number of broad-spectrum insecticides/miticides are labeled for clover mite control. Use as directed as a barrier treatment or, if labeled for spot treatment use, treat entry points such as foundation mortar joints, thresholds, and window casements. Indoors, after vacuuming as many mites as possible, use an appropriately labeled residual pyrethroid, boric acid or silica aerogel to help knock down mite populations. Another option is to perform a labeled aerosol or ultra low-volume (ULV) treatment of synergized pyrethrins or non-residual pyrethroids.