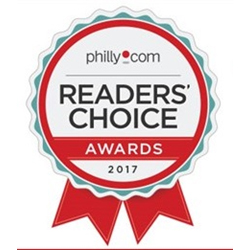 Green Pest Solutions has been selected as the winner of Philly.com’s 2017 Readers Choice Award for “Best Pest Control,” based on its popularity among Philadelphia Media Network readers and reputation in the greater Philadelphia region.

The Philadelphia Media Network held a ceremony at Le Meridien Philadelphia in Center City to honor the recipients of its Readers’ Choice Awards. The Philadelphia Media Network consists of the Philadelphia Inquirer, Daily News and Philly.com. Every spring, it holds a vote of their local readers to determine who among the thousands of Philadelphia-area companies stand out as the best in their respective categories. In addition to voting for the best pest control provider, readers were tasked with determining the best lawyer, auto dealer, real estate agent, veterinarian and several other types of businesses among its Home & Service category. Whoever got the most votes in each category was determined the winner and announced as such at the ceremony.

Green Pest Solutions was up against two other local pest management providers in its category after an initial round of nominations, and was determined the victor of the vote.

“It’s an absolute honor to win the Readers’ Choice Award. As a pest and termite service provider, this award really stands out,” says owner and President Matt Jesson. “It proves we are dedicated to our mission of providing superior customer service in the Philadelphia tri-state region.”

Green Pest Solutions has been named an Angie’s List Super Service Award winner five straight years, Best of Home Advisor three times, and a Best Pick by Ebsco Research the last two years. The company has 5 stars on Yelp, 5 stars on Google and 4.8 stars on Facebook. Green Pest Solutions is also an A rated BBB Company, is Quality Pro Certified by the National Pest Management Association, and a member of the Pennsylvania Pest Management Association.