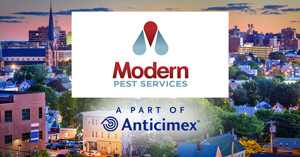 On July 10, Stockholm, Sweden-based pest management firm Anticimex announced its acquisition of Modern Pest Services, a family-owned pest control company founded in 1945 and based in Brunswick, Maine. Former Co-President Scott Stevenson will remain with the company and assume the role of president of the company. Modern Pest will continue to operate under its current brand as part of Anticimex Group. Paul Giannamore of The Potomac Co. represented and acted as exclusive financial advisor to Modern Pest Services. Terms were not disclosed.

“The acquisition of Modern Pest represents another important step in our strategy to expand in the Northeast and Mid-Atlantic region of the US,” says Anticimex Group CEO and President Jarl Dahlfors, referring also to the July 5 acquisition of Viking Pest Control. “Modern Pest has a long and proud history as a leading provider of high-quality pest control services. Together with Scott Stevenson and his team, we will continue to grow Modern Pest and particularly expand in the Boston area.”

In a press release, the Stevenson brothers noted that “Candidly, we didn’t think we’d do it. We met with several buyers, and we were pretty sure we wouldn’t find the right fit. We didn’t want to become just another branch of a national chain. But then we met with Anticimex and found their vision, core values and decentralized model the perfect fit for our team members and our culture. We’re proud to see the Modern brand live on and excited to join American Pest, Viking Pest Control, and Bug Doctor on Anticimex’s quest to become a leader in the U.S. pest control market. We’re also excited to see who will join the Anticimex team next.”