It is “ fairly common” for praying mantises to prey upon birds, researchers say.

A new study found nearly 150 cases of “mantis-on-bird predation” on each continent except Antarctica. Researchers from Switzerland and the U.S. examined scientific literature and searched the internet for photos and videos documents such attacks.

The mantid of the family Mantidae is considered a bird-hunting species, but the study reveals there are several other mantis species that hunt upwards of 20 different species of birds. Of the encounters discovered, most birds were consumed by the mantises — those without human intervention, that is.

“Birds still alive when in the grasp of a mantid were usually trying to escape by vigorous wing beating accompanied by distress calls, but they were able to escape through their own efforts in only three attacks,” the authors say.

The preyed-upon bird species from the study included the robin, warbler, flycatcher and thornbill, as well as nine different hummingbird species — and the attack methods were sometimes gruesome. In two cases, female mantises ate the bird while mating with a male.

“In several cases a hole was chewed in the victim’s head through which its brains were extracted,” the study says.

“The modus operandi of the mantis seems to be to approach the bird … and then enter the cranial cavity via one of the eyes, feeding on the brain tissues.”

Nearly 60 percent of the hummingbirds in the study were caught by non-native mantises, according to ScienceAlert.com.

“Our study shows the threat mantises pose to some bird populations,” author Martin Nyfeller said in a news release. “Thus, great caution is advised when releasing mantises for pest control.” 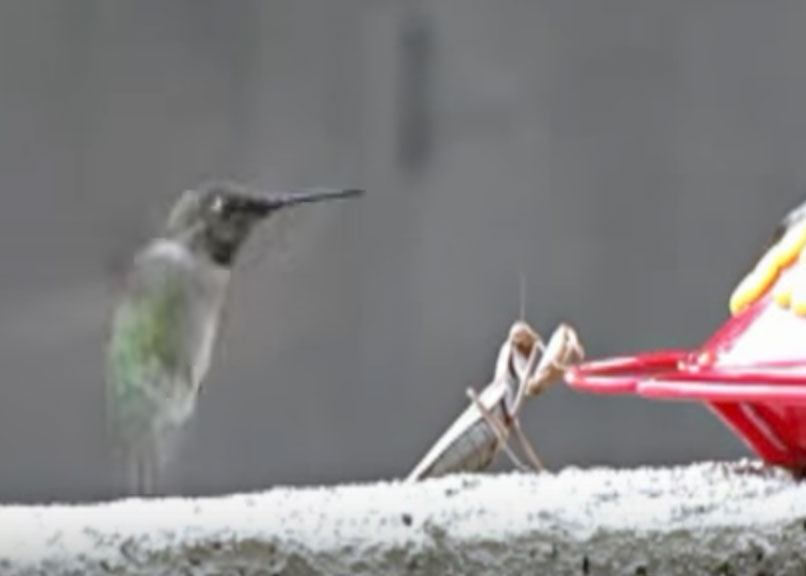