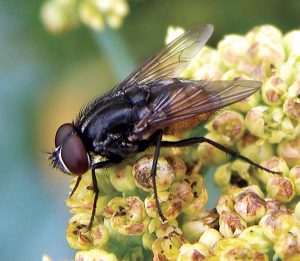 A male face fly rests on a flower.

Like its common house fly relative (Musca domestica), the face fly (M. autumnalis) can be a pest to humans and livestock throughout the United States and Canada. Unlike house flies, however, face flies are larger and darker in color. The Guide goes into detail about these and a variety of other flying insect pests in Chapter 14, titled “Flies and Mosquitoes.”

Male face flies can be separated easily from male house flies by the fact their eyes nearly touch on the tops of their heads. The females of the two species are a little harder to separate.

Both male and female flies in the genus Musca have a narrow band of small, hair-like pile on each side of the face, so the front appears to be bordered by two delicate, velvety stripes that run from near the top of the head to the lower margin of the face, separating the eyes from the bases of the antennae. On the face fly, this velvety stripe has a silvery sheen throughout its entire length, but on the house fly, the upper half is silvery and the lower half grades into a yellow-gold hue. Males of both species tend to congregate on flowers. 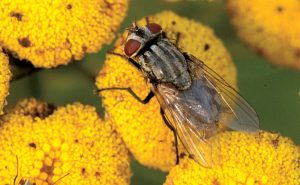 A female face fly rests on a flower.

Face fly eggs are laid on fresh cow manure in pastures all summer. The yellowish larvae live in the manure until they are mature, and then pupate either in the soil or on the surface. Female face fly adults live up to their common name because of their habit of feeding on secretions from the eyes, nose and mouth of horses and cattle. They are non-biting, but cause annoyance in livestock — and in some cases, infection as they feed on eye and nose secretions. Males have been found to prefer to feast instead on manure and nectar.

During the fall and winter months, both face fly sexes can cause annoyance to humans when adult face flies hibernate in the walls of homes and other buildings in the same manner as cluster flies (Pollenia spp.). On warm days, these hibernating flies become active, and frequently move to the inside of the building in large numbers. This behavior is why face flies are known in some regions as autumn house flies. 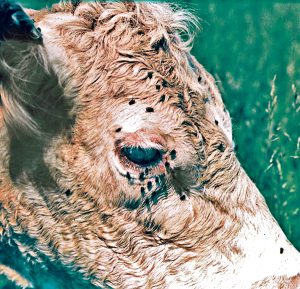 Your clients don’t need to own a cow to have a face fly infestation, but it certainly increases their chances if they do.

Study: Flies can carry coronavirus, but there’s little cause for concern

The right active ingredient for the job