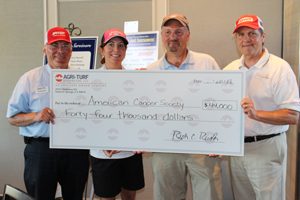 After play, everyone joined up at the clubhouse for dinner and a silent auction. Agri-Turf CEO Lon Records opened the evening festivities by thanking the sponsors for their generous support.

“We are here to raise funds to support ACS, but also to remind everyone that early detection is the key to improving odds against this terrible disease,” he said. “When someone is diagnosed with cancer, it is imperative to get a second opinion at a center of excellence.”

“We are deeply indebted to Agri-Turf Distributing for three years of incredible leadership at this event,” says Kristen Thompson, executive director for the American Cancer Society – Southern California and Nevada markets. “The funds raised support our key programs of cancer research, patient services, and education.”