Jersey’s Department for the Environment deployed a heat-seeking DJI drone with cameras to inspect an Asian giant hornet (Vespa mandarinia) nest, which authorities and beekeepers had spent months looking for, reports The Independent.

Jersey is an island in the English Channel, between England and France.

About 6,000 hornets were drawn out by the sound of propellers before spraying the drone with venom, reports say. 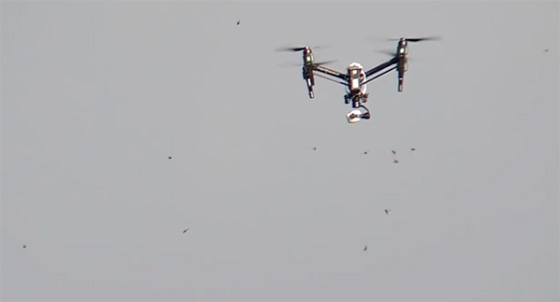 Video screenshot courtesy of The Independent

At 1.5 to 2-in. long, the giant hornets are among the more dangerous venomous insects of their type and, like Africanized bees and yellow jackets, they’re the cause of many problems.

While the hornets don’t typically swarm humans in large numbers, they’re well known for their ability to quickly decimate a hive of thousands of honeybees, leaving behind a trail of severed heads and limbs. They routinely fly miles from their nests and use scouts to locate bee colonies. Next they mark it with a special pheromone to attract other hornets to attack, destroy and occupy the hive.

Bees and other insect victims often become fodder for the growth of the hornet hive. Adult workers chew their victims’ flesh into a nutritious paste that feeds larvae, which produces saliva to be consumed by adults who can’t digest solid protein.