Joe Dittmar Sr., a fire-insurance industry executive, was on the highest occupied floor (105) in 2 World Trade Center (WTC) when the terrorist events of 9/11 unfolded in 2001. He shared his survival story at RISE’s recent annual meeting of specialty pesticide and fertilizer manufacturers, formulators and distributors. Following are a few sound bytes from Dittmar’s riveting talk:

“I was in the South Tower, 2 WTC, on 9/11, in a meeting with 53 other senior-level insurance executives, when the lights began to flicker at 8:48 am. The volunteer fire marshal for our floor came in and said there’s been an explosion in the North Tower — we needed to evacuate ASAP, using the fire stairwell.”

“We all took out our flip [cell] phones as we walked down the stairs, trying to let folks know what we knew and see what they knew. You on the outside knew a lot more than we did on the inside. But we couldn’t get through. There was no cell signal. The closest cell tower was atop the already-struck North Tower.”

“When we got down to the 90th floor, the door was propped open. We all went in to see what was going on. What ensued was the worst 30 seconds of my life: Seeing massive flames and black smoke billowing out of the North Tower, and this huge, ominous black hole in the tower filled by an enormous plane’s fuselage. I remember thinking, ‘My God, how did the pilot not see the tower?’ — not knowing then that he had seen it … and targeted it.”

“None of us thought in 18 short minutes a second hijacked commercial airliner would strike the South Tower we were in. Most of our group — type-A execs — were on the 90th floor, trying to get through on overloaded landlines, when the second plane hit. I was among the fortunate few. I had returned to the fire stairwell minutes before. I was with six other insurance execs, between floors 74 and 72, when the second plane crashed into the South Tower between floors 77 and 83.”

“As we raced down the fire stairwell, there was an overwhelming smell of fuel. The handrails were breaking from the walls, and the building was shaking. When we hit the 30th floor, we ran into the first responders: firefighters from the New York Fire Department and Port Authority. They were running toward what we were running from. I ask, ‘Could you be that brave?’”

“On 9/11, we saw human nature at its worst … and at its finest. Following the insidious terrorist attacks, we experienced an overwhelming outpouring of love. We must continue to stand united … and to always remember.”

“I do not accept monetary compensation for my talk, which I share about 50 times a year. Any honorariums go toward a 9/11 first responders memorial. It is my obligation to share my 9/11 survivor story — to give a voice to the nearly 3,000 who lost their lives that day.” 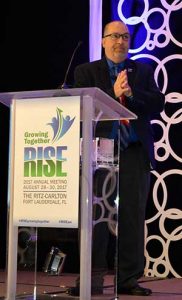 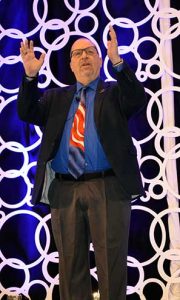 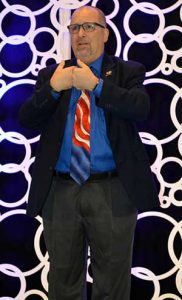 You can reach Pest Management Professional Editorial Director and Publisher Marty Whitford at mwhitford@northcoastmedia.net or 216-706-3766.