Roland Rhodes started his company in the pest management industry when he saw a need. He continued to meet that need through education and service.

In 1962, Deborah (Rhodes) Ball was almost 2 years old when her parents, Roland and Winona Rhodes, started Rhodes Chemical Co. in their home in Overland Park, Kan. Before the Rhodeses moved their company into a commercial building in Kansas City with their first two employees (Fred Clute and Ralph Stevens) in 1966, Ball remembers two things about the company during its infancy.

“There were chemicals stored in the garage that I wasn’t supposed to touch, and there was a phone in the kitchen that was used only for business calls,” she says. 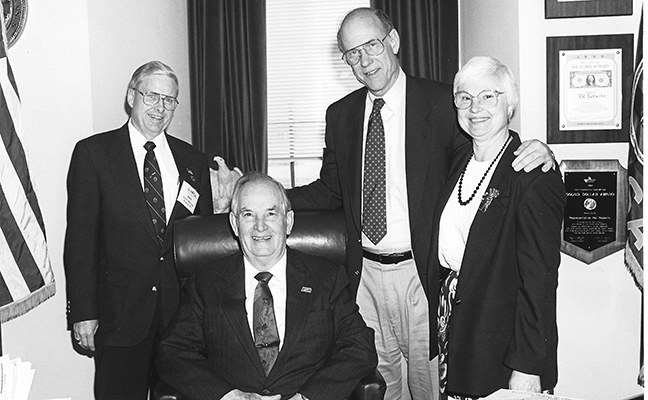 The one thing Ball remembers after the move in ’66 was playing with an adding machine in the new office. In 1969, when Rhodes moved the company a second time into the building where it’s located now, Ball remembers helping clean the building with her three siblings (Christine, David and Alan) in preparation.

Even though Rhodes didn’t want his children to be employees of his company, Ball ended up working there anyway. She started out as an accountant, moved up to vice president of finance, and became president when her father passed away on July 24, 2015, less than six weeks after he retired on his 88th birthday in June.

“He wanted us to find what we loved and pursue that,” she says, adding that her siblings have enjoyed careers in education, banking, land development and wholesale distribution. 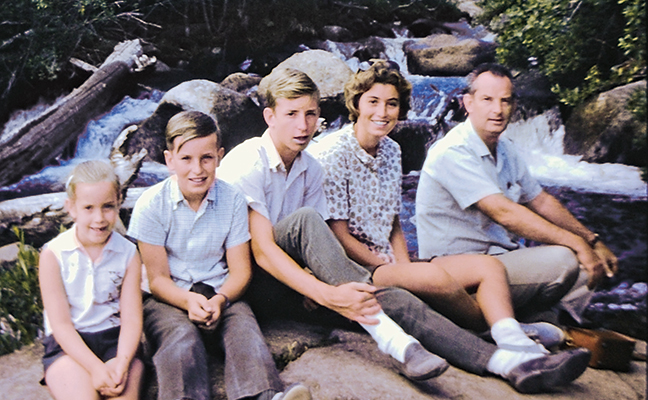 Family was very important to Rhodes. From left are Debbie, Alan, David, Christine and their dad.
Photo: Courtesy of Deborah Ball

Born on June 8, 1927, Rhodes grew up in Kansas City, Mo., where he lived with his two brothers and two sisters. As a young man, he worked as a paperboy and at the Kansas City Stockyard. After high school, he attended junior college for two years. At age 17, he joined the U.S. Navy during World War II. He was stationed at a Navy hospital near Seattle, caring for wounded sailors and Marines returning from the Pacific theater. After he was discharged, he attended the University of Kansas (KU) on the GI Bill and earned a bachelor’s degree in chemistry in 1949.

While attending KU, Rhodes married his high school sweetheart, Winona Carpenter, in 1947. Subsequently, he worked as a chemist for Stokley-Van Camp and FMC Chemical Division before working for Cook.

A member of the Entomological Society of America and Pi Chi Omega, Rhodes also was a charter member (1969) of the United Producers, Formulators and Distributors Association (UPFDA). In 2005, UPFDA presented Rhodes with the first-ever Malcolm Stack Integrity Award, which recognizes those in pest management who demonstrate a commitment to the industry and have a high degree of professionalism and integrity. The award is named after Bell Laboratories founder Malcolm Stack, a 2004 PMP Hall of Famer. 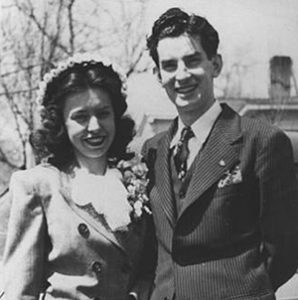 Winona and Roland were married for 68 years.
Photo: Courtesy of Deborah Ball

“Roland saw a need for distributors of specialty chemicals to have a common voice to speak to manufacturers,” says Valera Jessee, executive director of UPFDA, who worked with Rhodes for 25 years. “He was always a leader.”

Rhodes served on the boards of several state pest management associations and the Kansas Department of Agriculture Board for more than 17 years.

He attended the Purdue Conference for more than 35 years, and sponsored CEO roundtables at the Kansas Small Business Development Center. He also attended several NPMA Legislative Days and testified to the Senate committee about legislation affecting the industry.

“My father traveled to D.C. a lot to lobby for the industry and help it navigate through the [U.S. Environmental Protection Agency] regulations that were being passed through Congress during the early ’70s,” Ball says. “He also visited customers and attended educational sessions, such as the ones at Purdue University. He loved Purdue and went there more times than I can remember. Even when he quit making sales calls, he still traveled to state pest control meetings and visited manufacturers.” 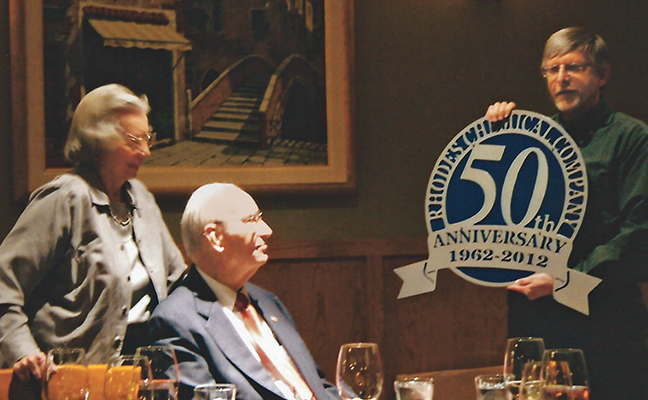 Paul Neill presents the medallion to Winona and Roland on the occasion of Rhodes Chemicals’ golden anniversary.
Photo: Courtesy of Deborah Ball

When Rhodes told Ball of his plans to retire, she decided her father deserved some recognition on the occasion, so she sent out a notice to customers and colleagues. In response, Rhodes received an avalanche of thank-you cards. Ball recalls how delighted he was, sharing the many fond memories he had of the industry and the people who comprise it.

That recognition and those memories continue.

Contributor John Walsh is a Cleveland-based writer. He can be reached at pmpeditor@northcoastmedia.net.