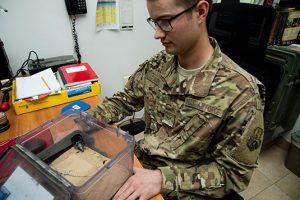 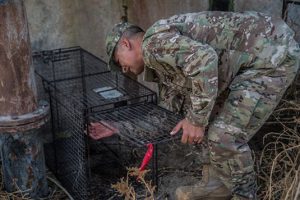 Becerra and Argo have been traveling along the base’s perimeter to capture wildlife that could possibly pose a threat, the Air Force says.

“We trap for feral animals; anything that is going to be considered a danger to the safety of the populace,” Becerra says. “We will get calls from [coalition partners] at night and they will have packs of dogs running through their base and underneath their trailers.”

Dogs cause damage to the perimeter fences by digging holes, which can cause security issues, according to the Air Force. But they also are known for being very protective of their young, posing a risk for base residents.

The goal for pest management and entomology in the Air Force is to keep the base’s insect, rodent and feral animal population at a manageable level, Argo says. To do this, they use a variety of control measures, including the use of rodenticides and pesticides, as well as trapping for feral animals.

“There are [cats] on base, they are pretty tame but there are some out in the wild, if you catch, that will go berserk – it’s like a Tasmanian devil in a little cage,” Becerra tells the Air Force. “[Most] are not dangerous but if units want to keep them they have to get their shots, in case [someone] gets scratched or someone becomes sick by a bite.”

Southwest Asia also is home to many venomous snakes and scorpions, including the black fat-tailed scorpion (Androctonus bicolor), a fast, aggressive scorpion whose venom can lead to death by respiratory failure.

“With snakes and scorpions and stuff like that, it’s our job to reduce and remove those populations from significant areas like tent cities,” Argo says. “Any time there is a disturbance like that, it is considered an emergency call for us.”

Becerra adds that their main focus is to educate service members on what they can do to prevent pest problems.

“We try to fix a problem before it becomes a problem,” he said. “We try to be proactive instead of reactive. We tell people that sanitation is the key, you know if they keep their areas clean it will help prevent [pest problems].”