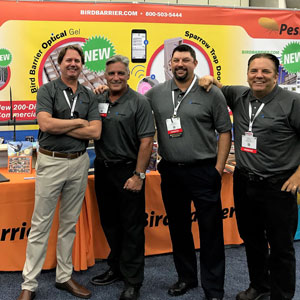 The company’s three original products — the Bird Coil, Daddi Long Legs and Peacock — were invented and patented by Vic Chatten, a former U.S. Navy officer, deep-sea diver, and occasional stuntman for John Wayne. When tinkerer Chatten passed away about 15 years ago, his dream was lifted to new heights under the leadership of Cameron Riddell, Bird Barrier president and CEO, and Riddell’s friends Joe Bollinger and John Houghton, who purchased the patents.

While two of Chatten’s original products remain solid sellers, the company has expanded its offering to include StealthNet exclusion netting and hardware, Bird-Flite Spikes, Bird-Shock Flex-Track, Eagle Eye, Tree-Shock, Dura-Spike, and Optical Gel and myriad other innovations. All of Bird Barrier’s products are humane: They simply repel pest birds, prompting them to move to other locations without hurting them. Case in point: Bird Barrier’s Bird-Shock carries an endorsement from the U.S. Humane Society.

“Univar thought it was a great idea,” Riddell recalls. “Their representatives in offices around the U.S. invited local pest control operators for a two-day training class. We’d show up with boxes of tools and equipment, and a carousel of slides, and teach the group all about bird control.”

The first day featured classroom instruction, while the second day took the class out onto a real building where a bird problem was solved using Bird Barrier products. Bird Barrier continues to teach its class 24 years later, and many of the company’s largest customers to this day credit the class with their start in the business.

“It’s hard to believe how fast the years have flown by,” Riddell adds. “I was just 30 when we started in a small shop with one box of product. Now I’m 55, my kids have almost flown the coop, and our much-larger warehouse is busting at the seams. Time flies.”