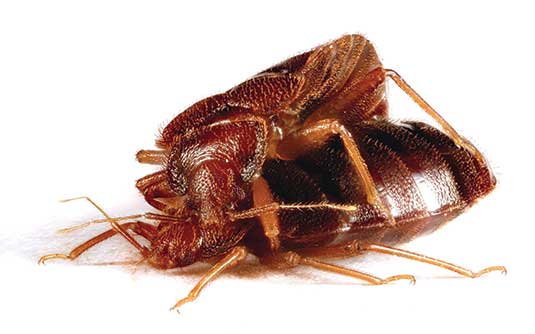 In lieu of Valentine’s Day, the National Pest Management Association (NPMA) is sharing the less than romantic, quirky, and sometimes fatal ways certain pests woo their mates, proving that ‘love’ doesn’t need to cost a thing.

“If you think the dating scene is rough out there, just be glad you’re not an insect,” said Cindy Mannes, vice president of public affairs for the NPMA. “While their rituals may seem weird to us, insects have evolved into expert breeders, biologically wired to do what it takes to procreate quickly, and in large quantities.”

Here’s a look at three common pest personalities and how far some species will go to attract the perfect mate:

Male American cockroaches have to impress their lady-in-waiting before they can mate. Casanova-like-cockroaches flap their wings, expose their abdomens and even nibble the female. Silverfish court each other through an elaborate three-step process that includes repeatedly touching the antennae of the intended mate, chasing the male as he playfully runs away, then lining up side by side to signify consent and complete the ritual.

Male earwigs find mates using their sense of smell. Once coupled with a female, the male uses their long cerci, which look like pincers, on their backsides to attach himself to her. Undisturbed, the earwigs can stay in this mating position for hours. Female termites release “mating pheromones” that act as a perfume to entice male termites. Once the males locate the female termites, they will break off their wings, symbolizing that they are a couple, sometimes for life!

3. The “let’s just get down to business” type

The fire ant queen can live for up to seven years, but male ants, called drones, aren’t so fortunate. Their only role in the colony is to mate with the queen and they die soon after doing so. When the queen needs males, she can overwhelm the colony with male eggs. The female workers kill many of the males, but they can’t get rid of them all.