The benefits of randomized, double blind testing for detector dogs 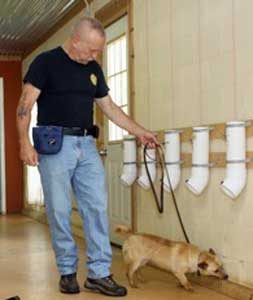 Editor’s Note: Learn more about WDDO in our March issue profile on the author, online here.

If you’re not familiar with the phrase “randomized, double blind” testing, it basically describes a scent detector dog team proficiency test method, wherein no one present during the test — including the tested handler — knows the solution to the testing problem. In randomized, double blind testing, the placement of hides and the number of hides used is randomly chosen for each test setup.

In my opinion, based on my decades of experience in working with, testing and training detection dogs for police and fire rescue work as well as mold and pest management, the randomized, double blind testing represents the fairest and most objective test available for evaluating the proficiency of detector dog teams. By comparison, in traditional detector dog certification tests, the test monitor(s) always know how many hides are present and know exactly where they are located. In many cases, the monitors are two individuals who are present in the test area during testing, in addition to the tested handler. The location(s) of hides is not randomized in traditional testing. Therefore, recognizable patterns of the placement of hides, by testing officials, run the risk of becoming obvious to repeatedly tested handlers.

In traditional test set-ups, tested handlers are informed as to how many locations they must correctly identify as containing odors (how many hides were placed) in order to be successful, thereby revealing a significant part of the solution to the testing problem. The problem is that persons with this knowledge, who are present during testing, can introduce bias by unintentionally, or possibly intentionally, offering subtle cues to tested handlers and to tested dogs. For example, he or she might subconsciously choose to stand in the (usually small) test area. He or she might also pointedly move away from or block access to certain areas or pieces of furniture during a test. He or she might even stand in the doorway of a room until the handler has successfully found the hide, or pointedly keeps the doorway clear when the searched room is blank.

Other cues can include subtle changes in respiration rates by the monitors in the room, such as subtle gasps when the dog approaches an area of interest or sighs of relief when the dog moves away from a blank area without false alerting. Even facial expressions from test monitors can represent subtle cues. Any of these could help or hurt the team’s chances of success.

Next week, I’ll discuss research that shows other ways that we can inadvertently offer cues to tested dogs and handlers. In the meantime, if you’d like to learn more about the non-profit organization I founded, the World Detector Dog Organization (WDDO) and randomized, double blind testing, please visit WDDO.org. You’re also invited to join WDDO as a member and attend our April 5-7, 2018 conference, the details of which can be found here. If you have comments or questions about this post, please sound off in the comments section or email me directly at latimer_david@yahoo.com.