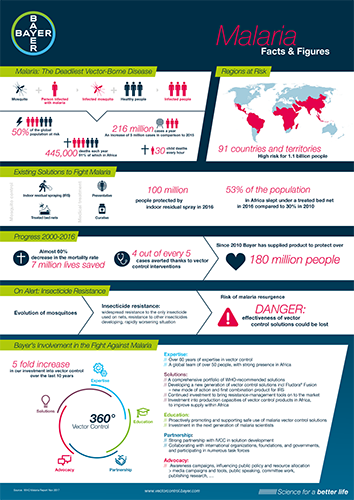 At the Commonwealth Heads of Government Meeting in London, England, on April 18, Bayer joined with BASF, Syngenta, Mitsui Chemicals and Sumitomo Chemical Co. to pledge its ongoing support to the research, development and supply of innovative vector control solutions, to help eradicate malaria by 2040. The industry collaboration is coordinated by the Innovative Vector Control Consortium (IVCC) and supported by its funders, including the Bill & Melinda Gates Foundation.

Since 2000, there has been unprecedented progress in the fight against malaria. Deaths have been cut by 60 percent, saving almost 7 million lives. Nearly 80 percent of malaria cases averted in this same timeframe have been due to vector control products, such as long-lasting insecticide treated bed-nets (LLINs) and indoor residual spraying (IRS) of houses, interventions that remain the most effective and cost-efficient means to prevent malaria.

The declaration, signed under the “ZERO by 40” banner, comes at an opportune time: Progress toward ending the disease has stalled. The World Health Organization’s (WHO’s) recent World Malaria Report confirmed a resurgence of malaria, registering 5 million more cases in 2016 compared to the previous year.

“The magnitude and global reach of the disease requires the engagement of all major stakeholders to work together if we are to achieve our bold and ambitious goal of ending the malaria burden within a generation,” said Dr. Jacqueline Applegate, a member of the Crop Science Executive Committee and president of Environmental Science. “The declaration signed today with our industry partners confirms the willingness to mobilize our diverse know-how and resources.”

Working in partnership with IVCC for over a decade, Bayer is pursuing the development of a novel insecticide active ingredient, which has recently progressed into a new development phase. Assuming successful progress through further phases, the solution could be effective in controlling insecticide-resistant mosquitoes and be made available for use alongside other tools to improve the impact of malaria control programs. In addition, Bayer is awaiting evaluation by the World Health Organization of Fludora Fusion, the first product to combine two modes of action for use in malaria indoor residual spray programs. The report is expected by the end of the year, with the hope that the product will be available to further contribute to the impact of malaria disease control.

Steps to identify and eliminate insects in imported sources