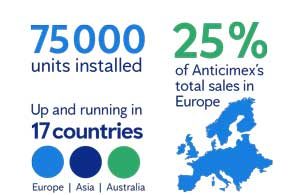 The intelligent pest control system Anticimex SMART has been widely used in Europe, Asia and Australia. So far, more than 75,000 Smart units have been installed in more than 17 countries. Now, the high-tech system is launched in the United States. Anticimex SMART is an intelligent system that detects rodents early. By constantly monitoring and immediately alerting, the system prevents costly infestations in an environmentally friendly manner, the company says. In Europe, it accounts for one fourth of Anticimex’s sales.

Anticimex SMART uses artificial intelligence (AI) to detect vermin the instant it breaches a building with a pest control solution that gives its users the best of two worlds: automation and expertise. Anticimex SMART provides digital reports to its users continually, showing results such as time and date for activity, as well as trend curves. The reports enable users to stay in control, minimize risks and see the value of their investments.