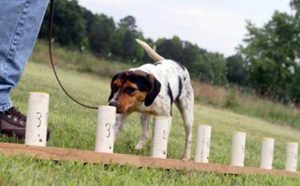 Let’s continue our discussion about how detector dog handlers can cause false alerts.

Here’s the bottom line, in many cases: When the dog false alerts, it is doing what we taught it to do. The dog’s perspective on what we call “reliability” and “accuracy” is based on when the handler is happy and gives it a reward. Dogs don’t set out one day to “trick” us into giving them a treat or a toy. The only reason for a dog to act guilty is for you to be accusatory or unhappy.

Conversely, the only reason dogs need to celebrate is for you to celebrate. If you reward them, they will reasonably believe you are happy with whatever behavior they just offered you, wherever the alert is performed and based on the particular signal they just received from you. The fact that it may be a false alert is irrelevant, if you act happy and reward them. What if the dog thinks that following our instructions is what’s important to us – and not so much the odor? It does happen. If the dog is using ANY criteria other than odor to perform its alert, this is a problem. To paraphrase the great Vince Lombardi, here’s what we need for the dog to understand: “Odor isn’t the most important thing, odor is the only thing.” I’ve seen handlers inadvertently establish a cue for the dog to alert, a cue that is independent of sniffing and hunting — one that the dog sees as meaning that it should alert regardless of whether odor is present. Such cues can take many, many forms, but most can boil down to one of two issues:

• Too much training after hiding odors for yourself can very quickly and easily result in just that happening.
• Rewarding for reacting to a cue, just a few times in a row, can establish false alerting as a new behavior that may become just as reliable as alerting to target odor.

If your dog is frequently false alerting and you aren’t asking yourself what you could be doing to cause this, you’re probably focusing on the wrong end of the leash. Going into a search with a preconceived notion as to what the outcome of the search will or should be, can be described as expectation bias. Preconceived notions and biases are as human as breathing. Can bias be dealt with and its influence on our dogs minimized? Yes it can, by encouraging the dog to develop a strong sense of self-confidence and to develop the confidence that the handler is supportive of its genuine effort at odor detection.