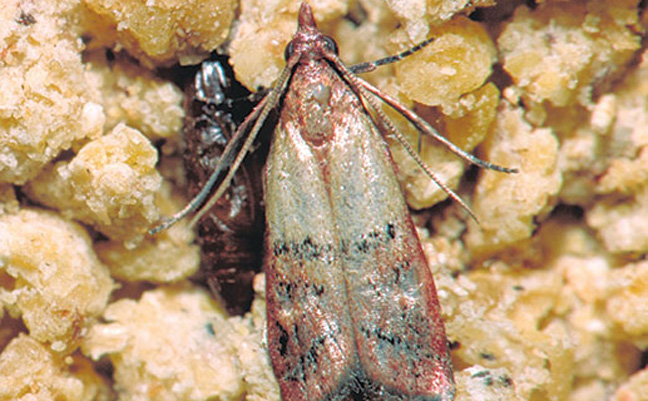 Indianmeal moths are notorious for roaming great distances in search of food. Photo courtesy of, and copyrighted by, Gene White, pmimages@earthlink.net

Mating disruption was first manufactured for agricultural pests. It is now a common control method used for Indianmeal moth infestations in food facilities.

Adult moths lay eggs in food and the egg hatches into hungry larvae. Since the adult moth doesn’t eat, all of the energy requirements fall onto the larvae, so they will consume the food that they were born in, defecating and leaving webbing behind. As they prepare to pupate, they’ll typically leave the food they have called home for the last 30 or so days, and find a dry, undisturbed crevice to build their pupae case in. Once pupation is complete, an adult moth emerges. Not hampered by the need to eat, the moth spends its entire adult life, approximately two weeks, searching for a mate, and laying eggs in the food.

The female moth releases a sex pheromone, a species-specific signal to alert male moths. The male is able to detect the sex pheromone in contrast to the normal air he is surrounded by. The moths detect the pheromone with their antennae. Once the male detects the air change, he will try to find the concentrated source from the female.

As with most stored product pests, Indianmeal moths live in the food they are feeding on. Unlike many other pests, they’re not going back and forth from harborage or nest to food. The food is their “nest.”

Typically, the most effective control tool is sanitation. If we can identify the food they’re living in and remove it, we have eliminated both their food source and their home.

For a huge food plant, processing grain-based foods all day, this can be challenging because all the food in a food plant cannot just be removed or thrown away. Even with a strong sanitation program, there’s the potential for food debris to lodge in cracks and crevices in the facility, providing sustenance for stored product pests.

Often, we may not know where the source is; so monitoring tools and inspection is the key to identifying infestations early, before they become unmanageable. Sanitation alone will probably not control a widespread problem.

For plant-wide infestations, the next step may be chemical control through fumigation. Fumigation will introduce toxic chemicals to the facility, killing all within. A heat treatment may also be considered, which pumps heat into a facility at temperatures that are lethal for insect survival. Both solutions are effective, but are dangerous and take time, often around three days in a typical food plant.

Mating disruption removes the contrast in the air that the males work to detect. The entire facility is saturated with the female pheromone. The females’ pheromone gets lost amongst the synthetic pheromone emitting from the dispensers.

While this treatment is most effective in a contained space, such as a building or room where the air can be permeated with the sex pheromone, McCloud has also had success in facilities that need partial protection, for example, the pet food aisles in a retail facility.

Due to the specific climate cocoa beans require, the United States is unable to produce enough cocoa (Florida and Hawaii may have small-scale productions) to meet the country’s processing needs, so cocoa beans are imported. With the imported beans, Indianmeal moth infestations are often found that have to be identified and controlled before or at the production stage.

One of McCloud Service’s clients, a chocolate-manufacturing facility, used to handle the inevitably infested raw ingredients by fumigating their entire facility during every three-day weekend. The facility operated 24/7, closing only on holidays. By fumigating over a three-day weekend, operations only had to be shut down for two days.

The shut down time negatively impacted the client’s financial bottom line, but was a necessity.

The effective non-chemical approach was important for the client, but they also wanted to decrease the amount of time that the facility was not in operation. 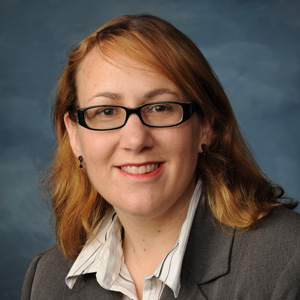 Unlike fumigation or heat treatments, employees can continue working while the dispenser released the pheromone and the facility does not need to shut down.

Though the cost of the treatment is comparable to a fumigation or heat treatment, the additional cost of shutting down the facility was saved.

McCloud’s service specialists installed dispensers throughout the building, on all floors. After monitoring the population for about a month, service specialists saw a dramatic reduction in Indianmeal moths in the monitoring traps (see graph). Not only were the Indianmeal moths effectively controlled using nonchemical means, but the client saved money by not having to shut down its operation.

BERRY is a technical director at B&G Equipment. Previously, she worked as training manager for McCloud Pest Management Solutions, South Elgin, Ill. She is a Board Certified Entomologist, ServSafe certified and instructor and proctor for the National Restaurant Association and is certified in HACCP. She holds a bachelor’s degree in biology from the University of Oregon and a master’s degree in grain science from Kansas State University.

Hold these SPP truths to be self-evident