How to use detector dogs in office settings 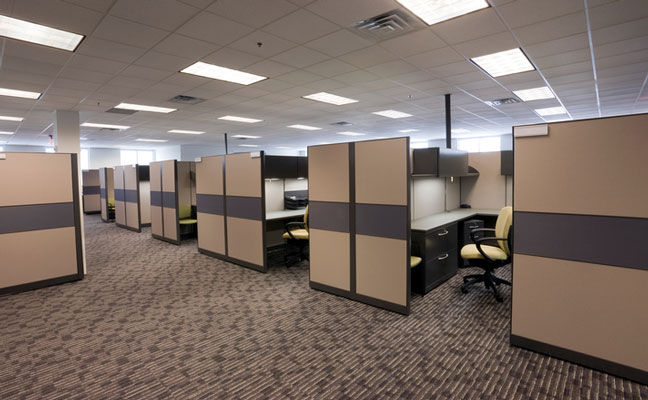 Our discussion about odor movement problems continues. Last time, we talked about how air moves and concentrates as it moves over and around common obstructions. In this segment, we’ll move on to talking about a common obstructions found in office areas, cubicles or freestanding walls. Remember that in all the illustrations, odor is flowing from the top toward the bottom of the picture.

Cubicles can come in many different configurations, but two of the most common are the “L” shaped and the “U” shaped, three-sided cubicle. These cubicles are rarely empty. They usually contain other obstructions such as chairs, desks, trashcans and other items. All of these items cause fluctuations in linear airflow and movement. Again, using screenshots from the Wind Tunnel Free App, I’ll illustrate how some of these items can alter air movement. 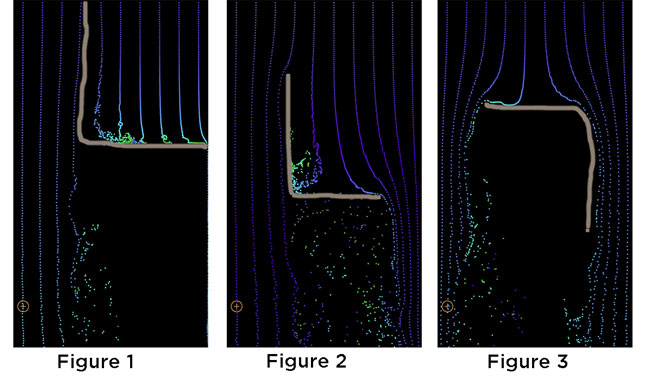 Cubicles are found in most, larger offices. They present a somewhat unique odor problem for dogs and handlers. The cubicle usually contains at least one chair, which is of course a favorite harborage, along with a desk, a trashcan and in many cases several electronic devices and file cabinets. All of these items can cause fluctuations in airflow, but none quite so much as the cubicle wall itself. The “L” shaped configurations in Figures 1 and 1 cause airborne odors to swirl and intensify in corners creating a potentially high concentration of odor. In Figure 3, the air flows and disperses around the cubicle walls more evenly. Some cubicle walls do not extend to the floor and may have as much as several inch gaps at floor level. Take this into account when considering how airborne odors travel through or around cubicle walls.

Figure 4 shows a three-sided cubicle with air approaching the open end. Note how odor tends to form eddies in each corner, resembling something of a bucket effect. If the cubicle is turned 90 degrees, to the right, as in Figure 5, air tends to move into and spread in the cubicle. In Figure 6 the cubicle is turned another 90 degrees to the right and practically all the airflow by passes the cubicle walls to the left and right. Note that the configuration in Figure 5 does not result in the air swirling and concentrating down stream of the cubicle as it did with the four-sided square shape. 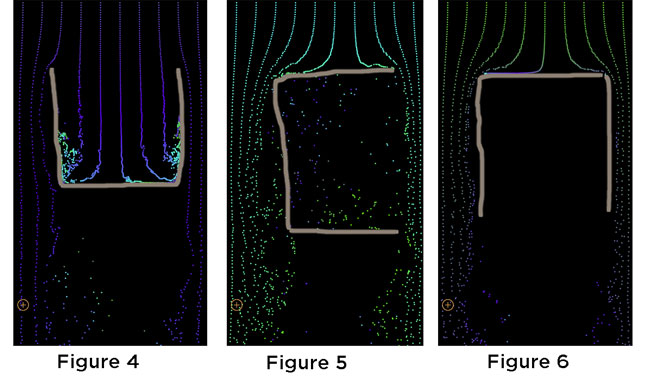 I hope this series will stimulate your thought process on how odor moves and gathers based on the obstructions it encounters. Considering the many ways that odor movement is effected by obstructions, it should give you an even greater appreciation for the detector dog’s need to apply its logic, training and experience to work through such problems. It should also be obvious that airborne odor doesn’t always move in exactly predictable ways. As handlers, we have to allow our dogs to work through the problem of pursuing odor to its source with minimal interference from us, because every time the dog is successful at working through a problem and getting to source it gets a little better at it and that after all is what this is all about.

In the next segment we’ll discuss teaching the point, which helps handlers identify the exact point of a source.