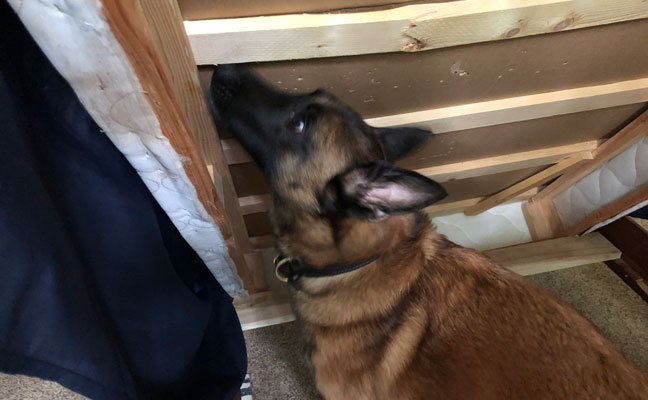 We haven’t yet, in this series on odor movement, discussed a training exercise to help your detector dog (and you) recognize the difference between a transient odor concentration and an odor source. It’s what’s called “the point,” and is demonstrated by the three dogs in the photos. The photos illustrate how the point can simplify and significantly shorten the visual search that should always follow a K9 alert to confirm the presence of the target substance.

I’ve taught arson, bomb, narcotics, bed bug and termite dogs how to identify the source, and how to reliably show their handlers exactly where that source can be found. To do that, I teach dogs the point. Performing the point means that dogs learn to hold their noses as near as they physically can to the specific area they’ve isolated as containing the odor source, similar to the way bird dogs perform the point to identify the location of quail or pheasants. 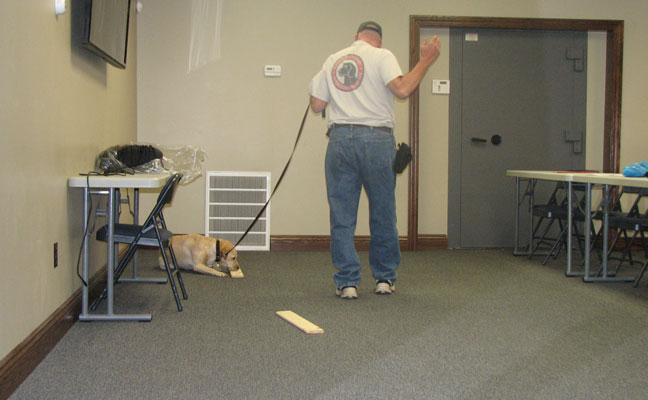 The “point” evolved during my days as an arson investigator. When I needed to take a fire debris sample. I needed to be sure the evidence I took came from the exact spot that the dog identified. It was crucial that I got this right, because I needed a lab to determine whether some ignitable liquid like gasoline was used to start or spread a fire. My case may not be prosecutable, or at best very weak, without such forensic evidence.

I brought the point to my termite and bed bug dog training programs, and found that it was an asset when it came time to visually confirm that the bugs were indeed exactly where the dog said they were.

In teaching the point, timing is crucial. I deliver a food reward by tossing the treat, just as I toss a toy to a toy-rewarded dog. (I’m going to explain in much more detail in upcoming articles why I do this rather than feed from my hand.) If you want your dog to learn to hold its nose at the odor source, you must reward when the dog is holding its nose at the source, not when it is looking at you or when it is looking or pointing its nose anywhere else. If you reward when the dog is looking at you, you’ll get a dog that looks at you for the reward. If you reward the dog when it is bobbing its head up and down in a clownish fashion, you’ll get a dog that repeatedly bobs its head up and down in a clownish fashion. You will get a repeat of whatever behavior you reward — that’s dog training 101. 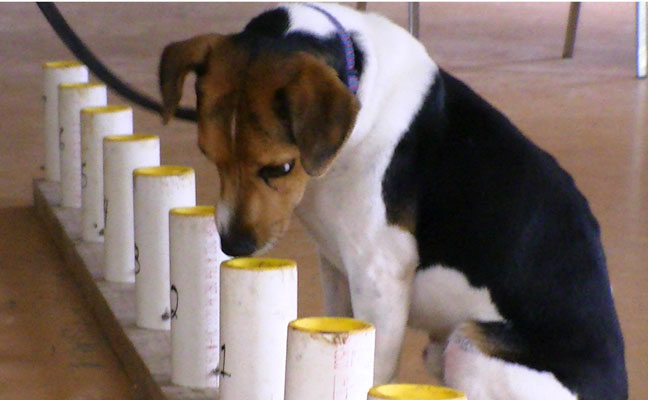 A dog that is taught the point, will quickly realize when it is not actually at source. It will abandon an alert to a transient odor concentration and re-engage the search until it finds the area where odor generation and its replenishment remain fairly constant and isn’t dispersed by air movement. This, of course, is where you are the most likely to find the subject of your search.