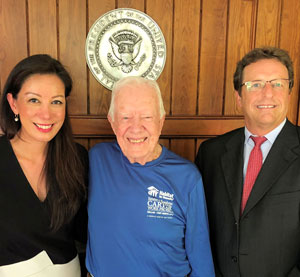 “BASF will continue to support the fight against Guinea worm disease to eradicate it.” This was the promise BASF’s Saori Dubourg made to former U.S. President Jimmy Carter at a recent meeting.

The Guinea worm is a parasite found in Africa that burrows through the skin and causes extremely painful wounds. It is transmitted when people drink stagnant water contaminated with tiny water fleas that carry the Guinea worm larvae. Guinea worm disease causes severe suffering, often in the farming season, leaving fields untended and affecting food supplies. In Mali, it is called “the disease of the empty granary.”

Jimmy Carter has been committed to eradicating Guinea worm disease since the 1980s through his organization The Carter Center. BASF has supported his efforts since 1988 by supplying Abate larvicide at no cost. Abate kills the larvae and ensures that the parasite is unable to spread for several weeks. The larvicide contains temephos, an active substance tested and recommended by the World Health Organization for the treatment of drinking water and to combat the Guinea worm. To date, BASF has contributed product valued at more than $4 million to the project.

The decades of commitment have paid off: Cases of Guinea worm disease have reduced by 99.9 percent. In 1986, 21 countries in Africa and Asia were afflicted by the disease, with around 3.5 million people suffering infection; in 2017, there were just 30 cases reported from two African countries.