What distractions mean for detector dogs 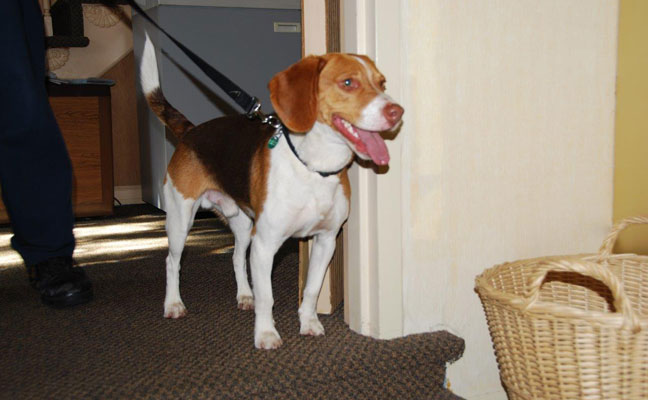 You take your dog into a room, give the command to search and rather than immediately focusing on sniffing, the dog runs over and stares out the window or sniffs under the door, maybe barks excitedly at something and just pretty much ignores your commands. Do you correct with a jerk on the leash? Do you repeat the command in ever increasing volume? What do you do? To borrow a phrase from social media statuses, “it’s complicated.”

From the dog’s perspective, what we call a distraction can represent something that the dog feels must be evaluated and checked out. In our world, I’d compare many canine distractions to us hearing a car horn blare nearby as we walk down the street. We feel compelled to immediately look and see if such a noise represents a threat or is relevant to us or we look just out of curiosity.

When the dog sees something new, he is thinking: “Is this new thing a threat? Is it a playmate or prey to be pursued? Is it friend or foe? Is it food?” While we can glance at the car that blew the horn and quickly determine whether we’re safe, the dog must investigate by sniffing and visually examining it, possibly listening closely for any informative noise; it may even want to lick and taste the new thing. The dog’s sensory evaluation includes its sense of smell, hearing, sight and sometimes it can include taste.

I’ve heard it said about dogs, that if they find something new and they can’t eat it, have sex with it or play with, they’ll simply pee on it and walk away. This adage refers to how simple life can be for a dog. The saying leaves out the fact that such a choice is made only after the dog has thoroughly evaluated and investigated the new thing.

“Distractions,” offer us a glimpse into how dogs think. The dog’s survival over the millennia depended on them formulating quick and accurate choices between two basic options when it comes to threats — flight or fight — wrong choices could mean serious injury, even death. Ignoring the opportunity to eat something could also be a mistake, since dogs often eat things they chance upon as well as what they hunt.

Since we’ve removed the dog’s flight option by tethering it to us with a leash or confining it in a room, sometimes we just have to be a bit patient and allow the dog to carefully evaluate something new. Not allowing the dog to sniff and investigate may force the dog to comply with your commands and to perform the physical acts associated with searching. However, out of the corner of its eye the dog may be carefully watching what you didn’t allow him to clear and not focused on the work. Not allowing the dog to investigate such a thing may increase the dog’s level of anxiety rather than forcing it to “get back to work.”

Next time, we’ll talk more about distractions and how we can get the dog more comfortable with encountering new things.