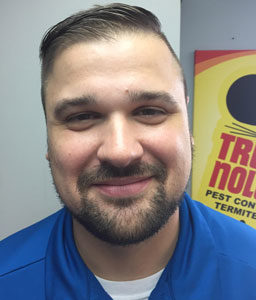 “I am most excited about having the ability to continue working with the team where I spent the majority of my first year,” says Gutzdorf. “I really like the culture of our company and look forward to instilling our values in each of my team members.”

“Aaron’s pest control managerial experience and passion for helping elevate everyone around him made him an easy choice for this promotion,” says Southwest District Manager Dave Scott. “We are very lucky to have him as a member of our Fort Myers team.”

Founded in 1938, Tucson, Arizona-based Truly Nolen of America is one of the largest family-owned pest control companies in the United States. Truly Nolen has over 80 branch offices in Arizona, California, Florida, Nevada, New Mexico, Texas and Utah. The company also has independently owned and operated franchises in an ever-growing number of territories including Kentucky, Georgia, New Jersey, Canada, Puerto Rico and more than 60 countries.