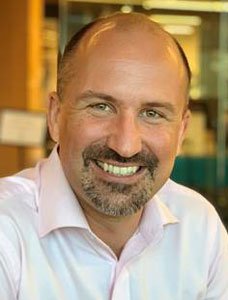 Burt most recently served as VP of Content Planning & Analysis and co-head of Corporate Development for the online streaming service Netflix, where he helped the company rapidly expand its international footprint from a U.S.-only to a global player, while also overseeing its rapid investment in original content around the globe.

“What drew me to ServiceTitan was the challenges it is solving for its customers, and the impact that it’s making on the lives of hard-working service men and women, and their families,” Burt says. “The broader home services market represents a significant, untapped opportunity for growth, and ServiceTitan is best positioned to achieve this growth. In addition, there’s an exceptional culture of excellence at ServiceTitan backed by a fantastic team that’s putting that culture into action. It’s truly a special time to be joining the company.”

2018 has been a notable year for ServiceTitan. In March, the company announced it had secured $62 million in Series C funding, and in November, ServiceTitan secured $165 million in Series D funding. The company has also been named one of the best places to work by Inc. and the Los Angeles Business Journal, and placed on the Forbes Cloud 100 list of the world’s best private cloud computing companies and the Inc. 5000 list of the fastest-growing companies in the U.S. In 2017, Forbes recognized ServiceTitan as one of the Next Billion-Dollar Startups.

“During David’s tenure, Netflix grew from a domestic service into a global media provider,” says Ara Mahdessian, CEO and co-founder of ServiceTitan. “He’s bringing that experience and expertise in growing a business to ServiceTitan at a pivotal period for the company. His insights and leadership will be integral to ServiceTitan as we build on the success we’ve had in 2018 and continue to offer our customers the highest level of convenience and customer experience in the home services industry.”

Burt earned a master of business administration degree from Harvard University and a bachelor degree in accounting from the University of Technology, Sydney, Australia. Before joining Netflix, he worked for J.P. Morgan Securities as an investment banker and for Bain & Company as a strategy consultant.

ServiceTitan was founded by Mahdessian and Vahe Kuzoyan in 2012, when they discovered there were few software options to recommend to their fathers — both of whom were tradesmen. ServiceTitan now has more than 600 employees in Los Angeles, Calif., and Atlanta, GA., and more than 2,500 client businesses throughout the United States and Canada.

- ServicePro: ServSales
This article is tagged with software and posted in News