Why are H. axyridis going to the dogs? 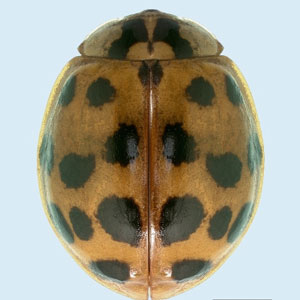 The multicolored Asian lady beetle (Harmonia axyridis, or ALB) is an invasive pest species that has “dogged” many a pest management professional (PMP). They resemble the native ladybugs — of varying species, depending on region — that your customers might have grown up with, but their sheer numbers and tendency to stain house siding, outdoor furniture, etc., make them a force with which to be reckoned. Add to that their penchant for biting when handled, and causing allergic rashes for some folks, and they are a bona fide pest.

Recently, we learned of a very unusual harborage spot for ALB, courtesy of the Houston (Texas) Chronicle: The inside of a canine’s mouth. Click on this link to see an example of the beetles burrowing this way. The photo actually went viral in 2016 from a Facebook post by the Hoisington (Kan.) Veterinary Hospital, but has regained attention in recent weeks because cold weather increases the beetles’ desire for a warm environment — like Fido’s yapper.

“Humidity is their normal environment,” Michael Shamsi, owner of Houston-based Pest Police, told the Chronicle. “They latch onto the roofs of the dogs mouths and it’s hard to remove them — you have to do them by one by one with tweezers. They are not a parasite though, they are a pest and they are just determined to survive.”

According to a PetMD article, Bailey, the dog whose mouth was pictured with more than 40 ALB embedded in the roof of her mouth, recovered just fine. (In fact, she has since come back to the vet’s office with the problem a few more times. It seems curiosity might have killed the cat, as the old saying goes, but it must just bother the dog.)

The article, which includes an interview with industry entomologist Dr. Nancy Hinkle, professor of veterinary entomology in the Department of Entomology at the University of Georgia, Athens, contains a lot of good information you can pass along to pet-owning clients.

We want to know, though: Have you come across this issue with your clients? Have you found these beetles in other oddball places? Tell us about it. Either sound off below, or drop us a line at pmpeditor@northcoastmedia.net.