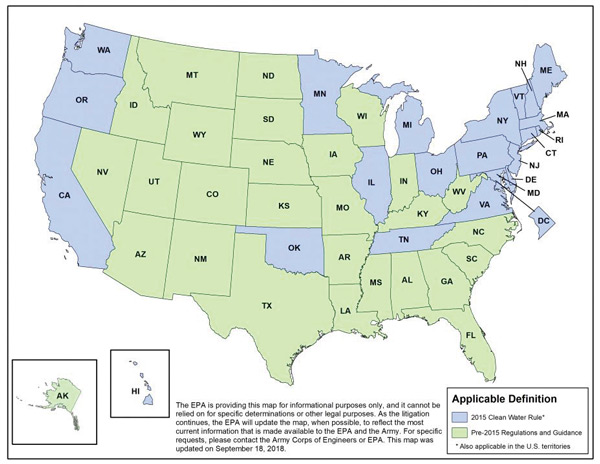 A proposed rule to replace the 2015 Waters of the United States rule (WOTUS) was created jointly by the U.S. Environmental Protection Agency (EPA) and the Army Corps of Engineers (Corps). The National Pest Management Association (NPMA) is one of several entities reviewing the proposal.

In a Dec. 14 newsletter to association members, NPMA VP of Public Policy Ashley Amidon said that it “does indicate a more measured approach than the 2015 rule.” Currently, discharges of pollutants, such as chemical pesticides, into or near WOTUS require a National Pollutant Discharge Elimination System permit under the Clean Water Act. The current definition of what constitutes a WOTUS is not well defined; it could range from a lake to a puddle in a driveway.

“The EPA and Corps have clearly tried to ensure that property owners have a better chance to look at a feature and visually determine whether it is a WOTUS or not, attempting to eliminate the uncertainty endemic to decisions under the 2015 rule,” Amidon said. “The agencies have also indicated their desire to adhere closely to Supreme Court case law. While there have been some criticisms of the new proposed rule, they are often based on the idea that somehow, the new rule’s attempts to make jurisdictional decisions more clear-cut represents a ‘rollback’ of protections. These attacks neglect to mention that states already have coverage under a myriad of state laws and regulations, and that a jurisdictional overreach under the last rule should not be considered a baseline.”

Amidon pointed out that while the proposed rule has a 60-day comment period, “a 30-day extension is likely” — which would put it into February 2019. She explained that the rule breaks down jurisdictional waters into six categories: traditional navigable waters, tributaries, ditches, lakes and ponds, impoundments and adjacent waters. The rule also lists a number of exclusions, including groundwater.

Amidon concluded her analysis by noting that the NPMA staff will continue to review the rule, and plans to submit comments. For further information, please contact her at aamidon@pestworld.org.