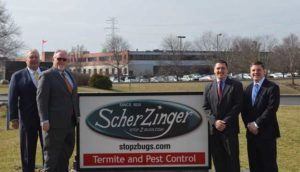 Althaus had been with the Cincinnati, Ohio-based company 43 years. He was instrumental in helping Scherzinger Pest Control  become the 67th largest pest control company in the country. In addition, he helped the fourth generation of Scherzingers transition through the company to their current roles, leaving the company’s next generation in a great position and ready to lead, the company says.

The company is equipped to meet the need for increased specialization in the handling of a variety of pest management issues and provides its customers with service and materials that reflect the latest advances in pest management technology. Scherzinger Pest Control services customers in Cincinnati, Dayton, Columbus and all areas in-between, as well as northern Kentucky.

Janet Thrasher appointed to Structural Pest Control Board of California